The first few weeks of this WNBA season, it appeared Minnesota undoubtedly was on its way to a second championship. Then the Lynx had a hiccup in early July, losing three in a row. Well … maybe not so fast on that repeat thing.

But, now, it again appears we might already know the winner for this year's WNBA race. Since the Olympic break ended, the Lynx have looked like they're ready to make like Usain Bolt on the rest of the league.

Tuesday in Minneapolis, the Lynx beat Los Angeles 88-77, giving Minnesota its ninth consecutive victory. And they did it in the now-standard Los Lynx way: spectacular performances from their two superstars, Seimone Augustus and Maya Moore, excellent game management from point guard Lindsay Whalen, very solid interior defense, and good contributions off the bench. 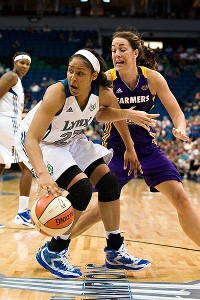 How do you beat the Lynx? When they're playing like this, nobody else in the league can.

It was a historic night for Augustus, who passed Katie Smith to become the franchise's all-time scoring leader. Of course, it was a very different Lynx franchise that Smith played for -- one that had little postseason success and always seemed mired in mediocrity. One of Minnesota's low points was trading away Smith in 2005 for what ended up being essentially nothing.

But Augustus arrived the next year, as the No. 1 draft pick in 2006, and that was when you could perhaps start to see the faintest light at the end of the tunnel. Well, maybe. Truth is, it was still hard to find a lot of optimism about the Lynx even then. Augustus got through those hard times, though, accepting the fact that much of the franchise's future was on her shoulders.

She was more than happy to share some of that load with the Lynx's No. 1 draft pick in 2011, Moore. And all the parts that have surrounded them last season and this one have fit pretty perfectly, too.

Moore said at the start of 2012 that the challenge for the Lynx would be to stay as hungry as they were last year when they were chasing the franchise's first title. Well, the Lynx appear to be just as ravenous now as they were a year ago.

Augustus had 23 points and four assists against the Sparks. Moore had 23 points, nine rebounds and a career-high seven steals. She threw in two assists and a blocked shot, too. If you wanted to do an instructional video on hustle from a great player, this game by Moore would be fantastic footage.

Rebekkah Brunson and Taj McWilliams-Franklin led the effort to clog up the Sparks' inside game. Guard Alana Beard led the Sparks with 17 points, and she's really coming into her own again offensively. Since the Olympic break, Beard has scored in double figures in six of the Sparks' seven games.

The problem is, the Sparks are not playing as well on either end of the court as they need to. It seems pretty clear that center Candace Parker is not physically 100 percent; on Tuesday she had just six points on 3-of-8 shooting.

The Sparks have lost three in a row. They have two road games left before finishing out the regular season with four at home. The best news L.A. has right now is that next up is the team with the league's worst record, 5-22 Washington.

The D.C. fans are likely to give a warm greeting to former Mystic Beard, but she will have serious business on her mind in trying to get the Sparks out of this slump. Now four games back of first-place Minnesota in the West, it seems unlikely that the Sparks are going to catch the Lynx. Instead, L.A. has to concentrate on getting Parker in as good a shape as possible for the postseason, and trying to go into the playoffs with some momentum.

That's something the Lynx have in abundance right now. The biggest challenge Minnesota faces for the rest of the regular season is weariness from travel: The Lynx play six of their last eight games on the road.

If any team is prepared for that grind, though, it appears to be Minnesota. The Lynx look ready for anything.