LOS ANGELES -- The biggest surprise for Nneka Ogwumike in her first season in the WNBA?

Just how easy it was.

Well, maybe she didn't put it exactly like that, but as the Los Angeles Sparks forward accepted the WNBA Rookie of the Year award Sunday morning before Game 2 of the Western Conference finals, she talked about how "smooth" her transition into the professional game has been. 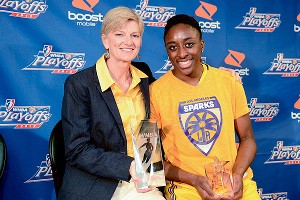 Jon SooHoo/NBAE/Getty ImagesBoth coach Carol Ross and Nneka Ogwumike are in their first season with the Los Angeles Sparks.

She did it while sitting next to Carol Ross, who also was named the league's coach of the year after leading the Sparks to a 24-10 regular season.

"I expected a lot of things," said Ogwumike, who became the fifth consecutive No. 1 overall draft pick to win rookie of the year honors. "The program I was welcomed into, it was a blessing. From Penny [Toler] to the Madisons [the team's owners] to the coaches and the teammates … I haven't had any complaints about how they have helped me develop this season, and I couldn't have asked for a better place to be. It's not just a program, it's a family, and I'm all about that type of situation."

Blessed with remarkable athleticism and composure, Ogwumike was mentored all season by Candace Parker, the runner-up for the WNBA MVP award, and DeLisha Milton-Jones, a 14-year-veteran. Ogwumike averaged 14 points and 7.5 rebounds in her first professional regular season and made an immediate impact, helping the Sparks' contend for the league title.

Ross said Parker and Ogwumike have made a potent combination in the frontcourt. And they made her job easier.

"Any coach would be fortunate to coach either one of them, much less both," Ross said. "Both bring different things. Candace has already experienced so much, and for Nneka to be able to play in that tandem and have some on-the-job training while she's growing as a pro player has been beneficial.

"We have the youth and energy and enthusiasm of the best rookie in the league in Nneka and the experience and wisdom of one of the most talented players in the world in Candace Parker. It's been great for them to work together."

Ross is in her first season with Los Angeles after serving as an assistant in Atlanta, where as the Dream's defensive guru she helped them to two straight trips to the WNBA Finals.

Ross, who feels fortunate to have inherited a roster full of both experience and talent, said it was her goal this season to teach her team to overcome adversity.

"That's been one of the biggest things with this team, to get through the tough stuff," Ross said. "Anybody can play when everything is going your way. But how do you bounce back?"