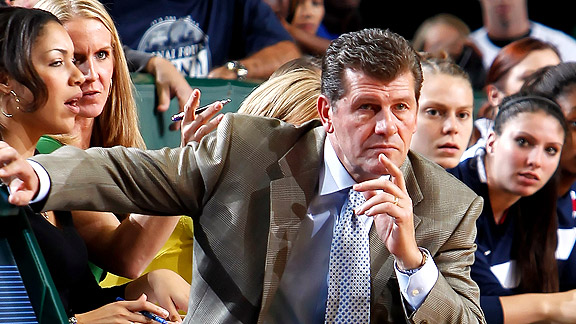 Geno Auriemma was born on Mar. 23, 1954 in Montella, Italy. His family moved to Norristown, Pa. at the age of seven.

Auriemma was hired as an assistant women's basketball coach at St. Joseph University in 1978 after graduating from West Chester University of Pennsylvania. He returned to his high school alma mater, Bishop Kenrick, to coach boys' basketball from 1979-1981.

Auriemma served as the primary assistant coach of the women's basketball team at the University of Virginia from 1981-85. Working under head coach Debbie Ryan, the Cavaliers won the Atlantic Coast Conference championship in 1984.

Geno Auriemma was hired as the head coach of the University of Connecticut women's basketball program in 1985. Prior to Auriemma's arrival, the Huskies had just one winning season in the program's 11-year history. His first year as head coach, Auriemma finished 12-15, his only season with a losing record.

He landed his first major recruit in Kerry Bascom, an All-American from New Hampshire.

In the national semifinals, top seed Virginia defeated UConn 61-55. With Bascom graduating, Auriemma landed his next star recruit in center Rebecca Lobo. The Huskies would get knocked early of the NCAA Tournament during Lobo's first two seasons.

During the 1993-94 campaign, Auriemma coached the Huskies to a 30-3 record, the first time UConn won at least 30 games. The Huskies advanced to the Elite Eight before losing to eventual champion North Carolina.

With Lobo entering her senior year, Auriemma and UConn landed recruit Nykesha Sales, his highest-rated prospect since coaching the Huskies. UConn would go a perfect 35-0 en route to Auriemma and the school's first National Championship. They became just the second team in NCAA history to go undefeated and win the National Championship and the first NCAA basketball team to win 35 games in a season.

During their perfect season, Auriemma and the Huskies played Pat Summit's Tennessee Lady Volunteers for the first time in school history, which was the start of a rivalry between the two coaches. The Huskies defeated the Lady Vols 77-66, helping UConn earn a #1 ranking in the polls for the first time in the program's history. The two teams would meet again in the finals of the NCAA Women's Tournament with the Huskies winning 70-64.

Auriemma continued to outshine Summit in 1995-96, with his Huskies snapping Tennessee's 69-game home winning streak in a 59-53 win. UConn would advance to the Final Four once again but were defeated by the Lady Vols in overtime, 88-83.

Auriemma led the Huskies to another undefeated regular season in 1996-97 but Summit's Lady Vols knocked UConn out in the Elite Eight.

Sales suffered a season ending injury during the end of the 1998 regular season just shy of breaking the UConn all-time scoring record. In the Huskies next game against Villanova, the Wildcats allowed Sales to make an uncontested layup to give her the record. The Huskies allowed the Wildcats to score, essentially starting the game tied at 2. Auriemma was criticized by the media for jeopardizing the integrity of the game and stressing the importance of a school scoring record.

In 1998, Auriemma signed five of the nation's top 15 recruits; Sue Bird, Tamika Williams, Swin Cash, Ashja Jones and Keirsten Walters. The five All-Americans wasted no time leaving their impact on UConn, winning a National Championship the following season. Auriemma and Summit's teams had three meetings during the 1999-00 season, UConn was no match for Tennessee, winning their second National Championship with a 71-52 victory. The Huskies set a school record for 19-straight weeks ranked No. 1 in the national polls.

Auriemma went out to California to land one of his biggest recruits ever in Diana Taurasi in 2000. Taurasi was named the 2000 Naismith and Parade Magazine National High School Player of the Year. With the addition of Taurasi, the Huskies returned to the Final Four but blew a 16-point lead to Notre Dame in a 90-75 loss.

With Cash and Bird as seniors and Taurasi a star in the making as a sophomore, Auriemma led the Huskies to an undefeated 39-0 season and a NCAA Championship. The Huskies were dominant all season, winning by an average of 35.4 points. In the semifinals of the Final Four, the Huskies defeated Tennessee 79-56. In the national championship game, which was the highest rated college basketball game at the time on ESPN, the Huskies defeated the University of Oklahoma 82-70. The starting five of Taurasi, Bird, Cash, Jones and Williams is considered the greatest starting lineup in women's college basketball history.

With the core of his team graduating, Auriemma refueled with a recruiting class that included Barbara Turner, Willnet Crockett, Nicole Wolff and Ann Strother. As a junior, Taurasi led the Huskies to their second consecutive undefeated regular season. On Jan. 18, 2003, Auriemma won his 55th-straight win, breaking the previous record held by Louisiana Tech. Their streak would reach 70 games before the Huskies lost to Villanova in the Big East championship game.

In the NCAA Tournament, the Huskies rallied from a nine-point deficit to defeat the University of Texas and advance to the finals against the Lady Volunteers. In the finals, Taurasi scored 28 points to give Auriemma and the Huskies their 4th national championship. With the win, UConn was the first women's college basketball team to win a national championship without a senior of their roster.

During Taurasi's senior season and as the heavy favorites for their third-straight NCAA Championship, Auriemma and the Huskies struggled during the regular season with losses against Villanova and Boston College in the semifinals of the Big East Tournament. As a result, the Huskies earned a 2 seed in the NCAA Tournament. Despite their struggles, Auriemma was able to lead his team to their fifth-straight Final Four after knocking off top seeded Penn State.

The Huskies defeated the University of Minnesota in the semifinals and knocked off the Lady Volunteers again for Auriemma's fifth national championship and third straight. The men's team also won the NCAA Championship, which was the first time a college basketball program won both the men's and women's titles.

With Taurasi gone, Auriemma and the Huskies took a step back over the next three seasons. In 2004-05, the Huskies went 25-8 and missed the NCAA Final Four for the first time since 1999. It also failed to win the Big East regular season championship for the first since 1993.

Auriemma was able to bounce back his program in 2006, winning the Big East Tournament. After squeaking by Georgia Tech on a Barbara Turner three-pointer at the buzzer, the Huskies lost to Duke 63-61 in overtime.

Auriemma landed Tina Charles, the nation's top ranked women's basketball player, but the Huskies failed to reach the Final Four for the third-straight season. In the Elite 8, the Huskies lost to LSU 73-50.

Auriemma added the nation's top ranked player again in Maya Moore in 2007. Moore was also heavily recruited by Tennessee and after she signed, UConn announced it was cancelling their season series with Tennessee. With Auriemma's entire team back from the previous year, the Huskies were the heavy favorite for the NCAA Championship. Despite losing Kalana Greene and Mel Thomas to knee injuries, Auriemma led the Huskies to their Final Four for the first time since winning the national championship in 2004 after rallying from a 14-point deficit against Rutgers University. In the Final Four semifinals, Stanford defeated the Huskies 82-73.

In the offseason, Auriemma landed Elena Delle Donne, the third consecutive year recruiting the nation's top women's basketball player. Delle Donne decided to not accept the scholarship because she was burned out and decided to enroll instead at the University of Delaware. Despite losing out on Delle Donne, the Huskies returned 10 players from the previous season and were top ranked team in the preseason polls. For the fifth time in school history, the Huskies went undefeated in the regular season with a 30-0 mark. Auriemma advanced to his 10th Final Four after his Huskies defeated Arizona State 83-64. In the national championship game, the Huskies defeated Louisville 76-54 behind Charles' 25 points and 19 rebounds. It was Auriemma's sixth national championship and the Huskies were the first school to go undefeated and win all of their games by a margin of at least 10 points.

Auriemma led the Huskies to their second consecutive undefeated regular season in 2009-10 with an average margin of victory of 35 points. Their dominance continued as they won by an average of 47 points heading into the Final Four. The Huskies defeated 6-foot-8 freshman Brittney Griner and the Baylor Bears in the Final Four semifinals 70-50, advancing to the finals against Stanford. With Auriemma's Huskies trailing 20-12 at the half, UConn went on a 30-6 run to win 53-47. Their winning streak extended to 78 games and the victory over the Cardinal is the only game where they didn't win by double digits.

In 2010-11, the Huskies extended their win streak to 90 games, surpassing the 88-game streak put together by John Wooden's UCLA team in the 1970s. Auriemma was critical of some of the media attention on UConn's achievement, saying it would not have been intense had UConn not been surpassing a men's basketball record, copmaring it to the low-key way in which the Huskies surpassed their own women's basketball record in the previous season. The Huskies streak came to an end against Stanford, the same team that had handed UConn its previous loss, in the 2008 Final Four. UConn won out to finish the regular season, adding another Big East regular season and tournament title to Auriemma's resume, but the Huskies fell in the Final Four to Notre Dame, preventing Auriemma from matching Pat Summit's record of eight national championships.

Geno Auriemma resides in Manchester, Conn., with his wife Kathy. The couple has three children, Jenna, Alyssa and Michael. 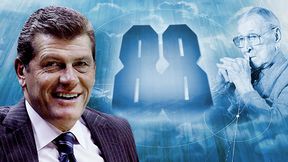 Between 2008 and 2010, Geno Auriemma led the Connecticut Huskies to 90 consecutive wins, surpassing the mark of 88 games set by John Wooden and UCLA in the 1970s. Win Streak »