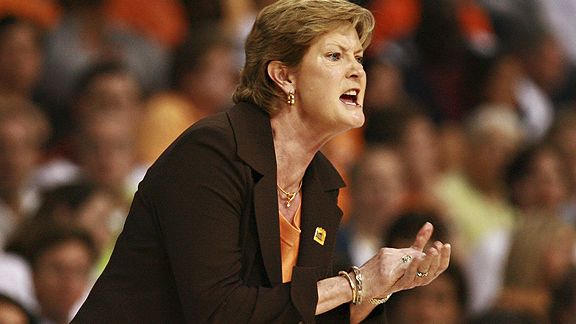 Pat Head Summitt is the former coach of the University of Tennessee women's basketball team and the all-time winningest coach in NCAA basketball history (men or women), with than 1,098 wins at the Southeastern Conference school.

Named the NCAA coach of the year seven times, Summitt led the Lady Vols to eight national championships -- including three straight titles from 1996 to 1998 -- and a remarkable 22 Final Fours (18 NCAA, 4 AIAW) in her 38 years of coaching at Tennessee. Her teams won 16 Southeastern Conference tournament titles and made an unprecedented 31 consecutive appearances in the NCAA tournament.

As a player, Summitt led the University of Tennessee-Martin to the national tournament two times before graduating as her school's all-time leading scorer. She played on the U.S. national team that won gold at the 1975 Pan Am Games and co-captained the U.S. team to a silver medal at the 1976 Olympics. Eight years later, Summitt coached the U.S. national team to gold at the 1984 Olympic Games. She was inducted into the Basketball Hall of Fame in 2000, the same year she was named the Naismith Coach of the (20th) Century.

Born June 14, 1952, in Clarksville, Tenn., Patricia Head was the fourth child of Richard and Hazel Head. After growing up on the family farm, she graduated from Cheatham County High School, where she was a four-year starter on the girls' basketball team and earned all-district honors in 1970.

She attended college at the University of Tennessee-Martin, where she starrred on the basketball court. She helped lead the team to a 64-29 record during her career, along with two appearances in the national championship tournament. She graduated (with a degree in physical education) as the school's all-time leading scorer (1,045 points).

During her junior year in college, she played with the U.S. team in the World University Games. Her silver medal won there was matched with the same finish as part of the national team at the 1975 Pan Am Games -- by which time, she had begun her college coaching career and had recovered from a knee injury suffered in her senior year at UT-Martin. She then played for and co-captained the U.S. team at the 1976 Olympic Games, earning another silver medal as the U.S. finished second to the Soviet Union as women's basketball made its first appearance as an official Olympic sport.

Pat Head Summitt accepted the offer of a graduate teaching and assistant coaching position at the University of Tennessee after graduating from UT-Martin in 1974. When the head coach suddenly resigned to pursue a Ph.D. study program, Summitt, 22, was promoted to the position. The Lady Vols lost their first game under the new coach, went on to finish with a 16-8 record (for fourth place in the Tennessee federation championship) and failed to make the Association for Intercollegiate Athletics for Women (AIAW) national tournament.

In her second season (1975-76), Summitt coached the Lady Vols while earning her master's degree and training for the U.S. Olympic team. The following two seasons, she guided Tennessee to back-to-back AIAW Region II championships and entry into the national tournament. The Lady Vols made their first AIAW Final Four in 1977 and made a return to the national semifinals in 1979 (finishing third both times).

Summitt and Tennessee followed that 30-win campaign by posting a 33-5 record for the 1979-80 season, when the team reached the AIAW national championship game but lost to perennial power Louisiana Tech. The 1981 national championship game represented another loss, 79-59 to Louisiana Tech, as both coach and team were gaining a reputation for falling short of titles by the early 1980s.

The NCAA had taken over from the AIAW as the governing body for women's sports by 1982, the year Summitt claimed her 200th career victory at Tennessee. The Lady Vols made two of the first three NCAA Final Fours, finishing runners-up to Southern California (and superstar Cheryl Miller) in the 1984 NCAA tournament final in Los Angeles. That summer, Summitt returned to L.A. and coached the U.S. national team to the gold medal at the 1984 Olympic Games.

The 1986-87 season proved historic for Summitt and Tennessee, as she claimed her 300th career victory and guided the school's team to its first national championship in women's basketball. Led by forward Bridgette Gordon and guard Tonya Edwards, the Lady Vols compiled a 28-6 record and avenged a regular-season loss to Louisiana Tech by defeating the Lady Techsters 67-44 for the national title. Gordon and Edwards also were part of Summitt's 1988-89 team that went 35-2 and captured a second national crown in three years; Tennessee topped Auburn in the SEC tournament final and the national championship game.

Summitt won her 400th career game at Tennessee the following season, but the team lost by one point in the SEC tournament final and was knocked out of the NCAA tournament after an overtime loss to Virginia in the regional final, ending a streak of four straight Final Four appearances.

Those close losses might have represented a disappointing start to the 1990s for Summitt and Tennessee, but the decade would prove hugely successful with the team's results in later seasons. In the 1991 NCAA tournament, the Lady Vols beat conference foe Auburn in the regional final before defeating defending champion Stanford in the national semifinals. The championship game against Virginia went to overtime, with All-American Daedra Charles and her Tennessee teammates claiming a 70-67 victory to give Summitt a third national title in five years.

Career win number 500 for Summitt came via defeat of Ohio State early in the 1993-94 season, when Tennessee again won the SEC championship but lost to Louisiana Tech in the regionals of the NCAA tournament. The Lady Vols rebounded the next season with a 34-3 record and advanced all the way to the 1995 NCAA tournament final (falling to an undefeated University of Connecticut team).

Heralded freshman Chamique Holdsclaw joined Summitt's program for the following season and helped lead Tennessee back to the Final Four, where the Lady Vols topped UConn and SEC rival Georgia to win a fourth NCAA championship in 1996. Summitt's team suffered 10 losses the next season but recovered by tournament time to charge through the NCAAs and earn a second consecutive national title.

The 1997-98 season marked another historic achievement for Summitt and Tennessee. Holdsclaw and freshmen Tamika Catchings and Semeka Randall led the Lady Vols to a perfect 39-0 record while capturing SEC regular-season and tournament titles along with a third straight NCAA championship for the school. The team that provided Summitt with her sixth NCAA title set a record for most wins by a women's team (in a single season) while becoming the first school to claim three consecutive national titles in the history of women's collegiate basketball.

The next season, Holdsclaw, Catchings and Randall became the first trio from one school to be named Kodak All-Americans in the same season. But Tennessee lost in the regionals to end its streak in the NCAAs. That marked the first of eight seasons without a national title, although Summitt and the Lady Vols advanced to the Final Four five times and came home with three runner-up finishes and two third-place spots.

During that stretch, Summitt garnered more personal honors and landmark wins as she entered into a fourth different decade coaching Tennessee. In October 2000, she was inducted into the Basketball Hall of Fame, becoming just the fourth woman to be so honored. That same year, she was named the Naismith Coach of the (20th) Century.

She earned her 750th victory with a 92-88 win over UConn during the 2000-01 campaign, when Tennessee finished with a fourth-straight 30-win season. In March 2002, she passed Jody Conradt as the all-time leader in women's Division I wins with her 788th win. In January 2003, Summitt won her 800th game to become the first woman to reach that level as a coach. Two years later, by virtue of a second-round NCAA tournament win over Pudue in March 2005, she passed Dean Smith's Division I record for wins with her 880th career victory.

In 2006, Summitt received a six-year contract extension from the University of Tennessee, which elevated her annual total compensation package to $1.125 million for the following season, thus becoming the first women's basketball coach to break through the million-dollar level.

In that next season, Summitt celebrated the 20th anniversary of Tennessee's first national championship by winning a seventh NCAA title with the SEC school. Sophomore All-American Candace Parker led the Lady Vols through the 2007 postseason and into the Final Four, where victories over second-ranked North Carolina and Rutgers put Tennessee back on top of women's college basketball.

Beginning the 2007-08 season atop the national rankings, Tennessee dropped two regular-season games. But Summitt and the Lady Vols were able to avenge both losses at the Final Four, as an Alexis Hornbuckle basket gave Tennessee a 47-46 victory over LSU to reach the championship game. Parker then scored 17 points in the final to lead Tennessee past favored Stanford 64-48 and give the Lady Vols an eighth NCAA title.

With Parker departing for the WNBA prior to the following season, Tennessee suffered through a 22-11 campaign and lost to Ball State in the first round of the NCAA tournament. During that season, Summitt registered her 1,000th victory on Feb. 5, 2009. That night, the University of Tennessee awarded her with a new contract extension that would run through 2014, along with a $200,000 bonus for her 1,000 wins at Tennessee.

Summitt finished her coaching career with 1,098 wins, the most among any men's or women's Division I head coach.

Pat Head Summitt was married to R.B. Summitt, a bank executive, and is the mother of Ross Tyler Summitt, who was born in 1990, just hours after she went into labor aboard a plane while returning from a recruiting trip to visit future player Michelle Marciniak. Pat and R.B. divorced in 2008.

Pat Summitt's father moved his family across county lines to a district whose high school had a girls' basketball team so she would be able to play.

She has authored two books, "Reach For The Summitt" and "Raise The Roof."

Summitt is the only person to have two basketball courts used by Division I basketball teams that are named in her honor (University of Tennessee and UT-Martin).

In 1997, Summitt was recognized in a ceremony at the White House as one of the 25 Most Influential Working Mothers by Working Mother Magazine. The following year, she was named one of Glamour magazine's Women of the Year.

In July 2009, The Sporting News named Summitt as one of the 50 Greatest Coaches of All Time.

In 2011, Summitt was diagnosed with early onset dementia, but continued to coach at Tennessee. She stepped down following the 2011-12 season. 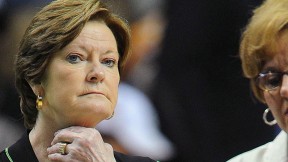 Pat Summitt steps aside as coach

Pat Summitt has stepped aside as Tennessee's women's basketball coach and will be succeeded by longtime assistant Holly Warlick. Story »

ALONE AT THE SUMMITT

Pat Summitt became the first coach to win 1,000 games in Division I when Tennessee defeated Georgia during the 2008-09 season.