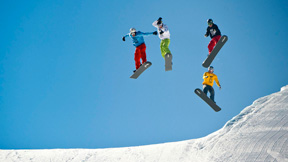 The X Games features athletes from across the globe competing for medals and prize money in the following sports: snowboarding, snowmobiling and skiing. More than 125 athletes will compete from all over the globe in snowboarding and skiing in Tignes, France for the third year of Winter X Games Europe and over 200 of the best action sports athletes will compete at events in Aspen/ Snowmass, Colo. at Buttermilk Mountain for the premier Winter X Games event.

Winter X Games 16 and Winter X Games Europe 2012 will be covered live on ESPN's family of networks as well as across ESPN's many digital media assets including ESPN.com/action, XGames.com and ESPN3.com. The X Games winter events include 24 original hours of high-definition coverage on ESPN and ESPN2 and 18 hours on ESPN 3D. A total of 34 hours of Winter X Games 15 content was also distributed across ESPN's digital platforms, including ESPN3.com, ESPN.com/Action, XGames.com and ESPN Mobile. Winter X Games content, results and updates were also distributed through the X Games social media platforms including Facebook, Twitter, Foursquare and Tumblr.