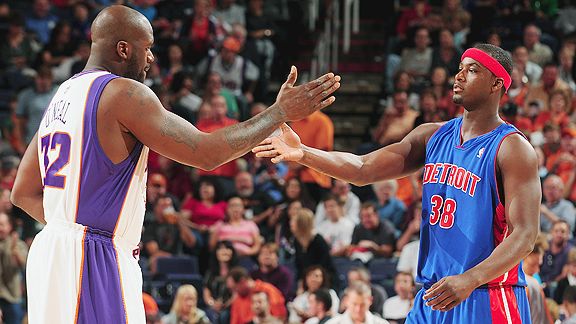 Shaquille O’Neal and Kwame Brown. Those two haven’t shown up in the same sentence too often over the years, but they’re linked on this occasion because they both remain on the radar of the Boston Celtics.

The East champs, even after the recent signing of Jermaine O’Neal, still want one more big man after inching to the brink of a full roster with Thursday’s signing of guard Von Wafer.

The problem? The Celtics only have minimum money left. Sources say they’re having trouble getting Brown to accept those wages, so you can imagine where Shaq stands on the idea.

Word persists that Shaq still hopes to be sign-and-traded somewhere by Cleveland that will allow him to secure a salary next season above the $5.8 million mid-level exception.

I’ve heard that Shaq, earlier this summer, was telling friends that the Spurs were the only team he'd consider playing for on a low-dollar contract.

But San Antonio, as covered previously in this cyberspace, doesn’t have the available minutes -- and really hasn’t shown the inclination -- to try to wedge the former local high school star into a world that still revolves around Shaq’s old rival Tim Duncan.

Atlanta? Sensible as it sounds for the Hawks to be the one team out there aggressively pursuing the 38-year-old -- given Shaq’s presumed ability to both stand up to Hawks killer Dwight Howard and sell tickets in Atlanta -- they just signed Jason Collins to be their No. 3 center and signed Josh Powell before Collins.

Which brings us back to Boston. I struggle to envision Shaq signing for a mere $1.35 million for next season, but the idea can’t be completely dismissed if O’Neal is serious about only signing with a team that can contend for a championship, since the Celts are still on that short list.

Tim Povtak of AOL FanHouse, who covered Shaq closely in Orlando when he broke into the NBA, reported recently that O’Neal has been lobbying Boston to come get him. Celts president of basketball operations Danny Ainge told the Boston Globe earlier this week than he didn’t want to comment on Shaq but acknowledged that “we’ve had some discussions.” And with Kendrick Perkins sure to miss the start of the season after knee surgery and with Jermaine O’Neal’s injury history, there is a legit need for another center.

The safer move for the Celtics is clearly signing Kwame, but I don’t think we need to remind you that Ainge -- who was willing to gamble on Stephon Marbury in the second half of the 2008-09 season when so many outsiders thought he wouldn’t dare -- is not afraid to take risks.