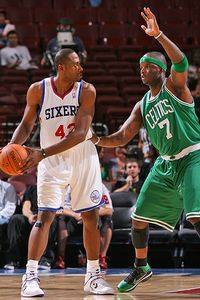 Jermaine O'Neal takes great pride in his ability to draw charges on defense.During a preseason game in Philadelphia, Glen Davis and Jermaine O'Neal seemed to be competing with each other to take charges. Said O'Neal at the time: "It's a contest this year: Who can draw the most charges. And I believe I'm going to win it."

Hindered by injuries, it's been a slow start for O'Neal, and he already finds himself in a bit of an early season hole as Davis has rocketed out of the charge-taking gates. We'll do our best to keep a running tally during the season (unfortunately, it appears the way Boston's box scores are being parsed at the phenomenally helpful stat site, HoopData.com, the charge totals are not tallying correctly for the Celtics). (Updated with official numbers from box score data).

(Think we missed a charge or an offensive foul? Don't hesitate to shout in the comments section).

Read on for the game-by-game breakdown of charges taken.