Drafting for need vs. talent remains one of the more polarizing debates in late spring among basketball fans and insiders. Do you take the best player on the board or opt to fill a positional need? Fortunately for the Toronto Raptors, their desperation for an interior player with defensive chops and the potential to flourish in the low post matched Ed Davis' profile. Nabbing the North Carolina big man with the No. 13 overall pick made a whole lot of sense for the Raptors. 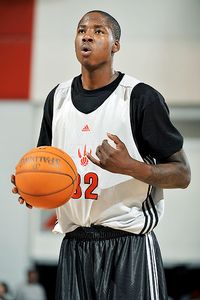 Ed Davis: Back and on track

Things were progressing well enough for Davis during his sophomore season at North Carolina. Although he hadn't put up the gaudiest numbers over the first twelve weeks of the season, Davis was quickly establishing himself as one of the ACC's tougher inside defenders and toughest rebounders. The offensive game still needed some seasoning, but Davis was a highly coordinated big with a soft touch. After New Years, he began to more aggressively stake out his territory on the right block, something that didn't come naturally to him in his freshman season. Then, in February, Davis broke the lunate bone in his left wrist, an injury that kept him out of action until a couple of weeks ago.

"Basically until I got to Toronto for that mini-camp, that was the first time I really played five-on-five since," Davis said. "It was rough at first trying to get back into the feel of things. But I think it's all starting to come back together now."

Davis completed his first stretch of competitive basketball since the injury on Saturday when the Raptors wrapped up their summer league schedule with a win over New Orleans. In scoring 14 points and collecting six rebounds in 18 minutes, Davis continued his consistent, efficient week in Las Vegas. He's far from a finished product -- and still not much of a threat beyond 12 feet -- but there's a level of ease with which Davis operates down low. Take a possession in the second quarter when Davis went to work against fellow first-round draft pick Craig Brackins. Davis got the ball off the left block, then patiently backed Brackins inside before unfurling a quick baseline pivot with his right foot. After spinning off Brackins' frame, Davis gathered the ball, re-established his balance then drew contact as he flicked the ball gently off the glass. Count the basket and the foul.

The balance, agility and soft hands have always been there for Davis, but over the past eight days, he's displaying more assertiveness on the offensive end. Though he's still not a guy with a natural inclination to explode from the elbow like Amare Stoudemire, Davis looks much further along than the kid who finished almost exclusively in the basket area at Chapel Hill. On Saturday, Davis even buried a face-up jumper, a rare sight when he was wearing Carolina blue.

For a Toronto team that finished last in the league in defensive efficiency, though, it's Davis' presence on the opposite side of the ball that offers the most appeal. Davis moves exceptionally well against the pick-and-roll, has exquisite timing as a shot-blocker and can clean the glass. Those are important attributes for a Raptors' front line that was bludgeoned inside last season.

"Those are things I bring to the team," Davis said. "I can help the team every night just by blocking a shot here and there, rebounding the ball and just by being in the right position at the right time."

In the third quarter on Saturday, Davis swatted away Josh Carter's layup attempt, igniting a fast break punctuated by a Dee Brown alley-oop to Ronald Dupree. On the very next possession, Davis was on the receiving end of a transition bucket when he ran the length of the floor and finished down the gut of the lane with the slam.

Not so long ago, Davis was projected as a Top 5 pick for his unique collection of talent. He combines some of the finesse of a skilled big man (those soft hands, smart passes out of the double-team) with the assets usually associated with a more brutish power forward (strong rebounding and shot-blocking). When asked to classify his game, Davis demurred.