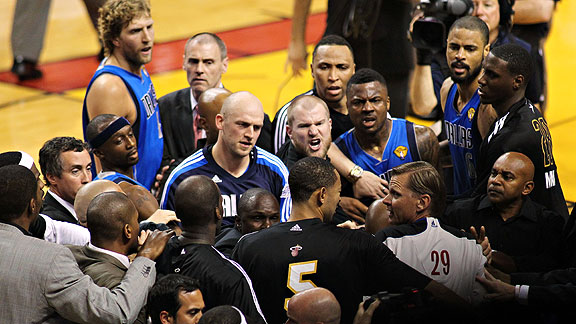 NBA rules say any player who runs from the bench area to a fight must be suspended.

The Mavericks prevented all that, of course, which may come with a touch of disappointment at the league office, where a Finals Game 7 does extravagant things to television ratings.

However, ending in six may also come with just the tiniest bit of relief, too. The league faced a PR challenge in the wake of a Game 6 scuffle, involving players like Joel Anthony, Juwan Howard, Ian Mahinmi, Shawn Marion and Brian Cardinal, who weren't checked into the game but did join the scuffle.

It's not that the little bit of shoving amounted to anything, nor that anyone wants to see anyone suspended. The league's predicament is that according to the NBA rulebook, the league is required to suspend those players.

And yet the league has announced no suspensions for next season, and indicated there may not have been suspensions for a Game 7 -- which feeds into the theory that the NBA's powers that be are not really governed by rules, but do as they please.

First, the entire relevant section of the rulebook:

During an altercation, all players not participating in the game must remain in the immediate vicinity of their bench. Violators will be suspended, without pay, for a minimum of one game and fined up to $50,000.

Meanwhile, here is a statement the NBA released during the second half of Game 6:

A player will not automatically be suspended for leaving the bench if he has already left the bench because a timeout was called.

Yes, the players were on the court because of a timeout. But, no, they were not at midcourt in the scrum because of the timeout.

And most importantly, the rulebook plainly does not make a commonsense exception for timeouts, despite the NBA's position.

What's more, on this particular rule, the league has scoffed at those who suggest the league interpret the situation beyond the letter of the law.

"The rule with respect to leaving the bench area during an altercation is very clear," said NBA executive vice president of basketball operations Stu Jackson in a 2007 conference call explaining the suspensions of Amare Stoudemire and Boris Diaw in a close-fought series the Suns went on to lose. "Historically, if you break it, you will get suspended, regardless of what the circumstances are."

"This is a very unfortunate incident," Jackson said in '07, "but the rule is the rule. It's not a matter of fairness. It's a matter of correctness, and this is the right decision."

In a combative interview with Dan Patrick after the Phoenix suspensions, Stern explained the rule's rationale:

"The entire intent as a rule, for the 10 years or so it's been in effect, was to make it clear that there's no way to know whether someone running out on the court is coming as friend or foe," Stern said, "and so when Rudy Tomjanovich came running out to see what was going on, to break up a fight, his face was forever changed. And it's a great concern that we have. So we made it as simple as possible."

This makes sense, and is the reason I supported the league's position in 2007. Back when he was a player, Rudy Tomjanovich ran to a fight to help break it up. Kermit Washington saw him coming and punched him in the face, leaving Tomjanovich with a concussion, spinal fluid leaking into the brain cavity, and fractures of the nose, jaw and skull.

Determined to prevent any such thing in the future, Stern's NBA made a rule he admits is draconian, that reduces incidents of players running to join fights -- specifically by making players on the sidelines paranoid of leaving the bench area knowing suspension is the automatic result. By confining fights to players on the court, the league gives the three referees a fighting chance of suppressing little skirmishes before more players get involved.

The NBA has had dramatic success in reducing fighting and, more importantly, resulting severe injuries, and this ban on joining fights from afar is a lynch pin of the progress.

And yet in Game 6, there was that rarest of sights: Players (watch Joel Anthony) sprinting from the bench to a fight (to say nothing of Mario Chalmers -- playing in the game before the timeout -- who sprinted over to antagonize, and took a long time to calm).

"What changed the series is Amare and Boris ran out onto the court and they either forgot about it or they couldn't control themselves. I don't know which one. And there wasn't an assistant coach there, one of six, to restrain them. OK, so now either we have to have new rules, put up a fence, or hire more assistant coaches.

"And, by the way, we had a very easy rule to employ, it's been in for a decade, and not one Competition Committee, not one owner, not one Governors meeting has ever raised the subject for a change."

Maybe that rule isn't quite as easy to employ as we thought. If there is, in practice, an allowance for players on the floor during timeouts, there ought to be that same leeway in the rulebook -- especially in the case of this rule, whose stark clarity has underpinned the league's controversial positions in the past.