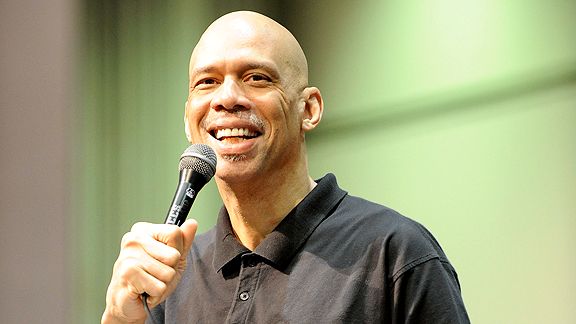 Over the weekend, the NBA Players Association recently concluded their camp for high-schoolers on the University of Virginia campus in Charlottesville. In addition to basketball, the camp has a heavy emphasis on off-the-court learning. One of the speakers was Kareem Abdul-Jabbar, and shortly after addressing the group on Friday, we caught up with him on the phone.

You just talked to something like 95 of the top 100 high-school players in the country. What did you tell them?

Basically that their education was very important to them, and that even if they make it into the league before becoming a four-year college graduate, they should still pursue it. I told them to prepare for a number of things that could ruin their careers. To keep an eye on the prize in terms of being able to make all these efforts that they need to to advance to the NBA.

How did they receive that?

They listened. Nobody fell asleep.

That's always a good indication. They asked pretty pertinent questions about what I went through when I was in their position. And some of the things they needed to anticipate if they were going to succeed.

Most of the ones that make it are very talented individuals. But that's only one or two a year. You got 30 teams with 15 guys on the team, that's 450 jobs that are there. And you have one or two guys making it, and thousands not making it. We've not lost awareness of all that.

These young people you talked to ... are they in a system that needs vast change, or are they on a reasonable path, and can expect to have as happy lives as could be expected?

Well, I think the ones that look forward to going to school, and look forward to getting their degrees, the ones that focus on that usually do better, over the long run. Maybe the NBA should raise the age limit from 19 to 21. I think that would really help a lot. Just a couple years of college, having to go to college and learn a system, having to defer to the upper classmen, and earn their playing time.

That really prepares them mentally, and emotionally, for what they're going to have to deal with as adults.

I have heard this amazing tale about your dad and a boy he helped liberate from a concentration camp at the end of World War II. Would you mind recounting briefly the story of Rabbi Lau and your dad?

That story -- people have gotten that all mixed up. There was a reporter in Israel who put my father into the tank battalion that liberated Dachau.

My dad was a police officer in New York.

One of the guys that he was a police officer with was in a tank battalion that liberated Dachau. Rabbi Lau was a boy in Buchenwald, which was also liberated by black troops, but it was a totally different group than the one that my dad's friend was in.

The group that helped liberate Buchenwald was the 183rd Combat Engineers, an all black unit.

And that's who you wrote the book about?

And that's how he got to know Smitty, who was one of the liberators of Dachau and other camps.

I met Rabbi Lau when I was in Israel in 1997. I just wanted to say hi to him because he had a particular regard for the black Americans that were involved in his liberation. I had participated in a couple of events they had in New York where they had reunited the people what were liberated with the people who liberated with them. Smitty, my dad's friend, participated in that.

What was your reaction to the Finals?

I think it was a triumph of great teamwork over great individual play. The Miami team really is not. They weren't ready to play the team game the way the Mavericks were, and that's why the Mavericks came out on top.

What about how people react to LeBron James?

I think people just did not like his style, in self-promoting and aggrandizement of himself that ESPN was part of, and the event on ESPN turned a lot of people off. All these things to say about him as an individual. It's a team game. People seem to lose sight of that pretty quickly.

How does he proceed from here?

That burden, really, is going to fall on the franchise, to get the right players that comprise a good team. He's always going to be, for his whole career, a dominant and outstanding player. The way that they put the team together and promoted the team really did not do the team any good, and it didn't do the game any good. It's a team game and they should promote it as such.

Before I let you go, what's your prescription for the Lakers?

I don't have one. I'm sure they have an idea of what they want to do, and I'll stay out of that.