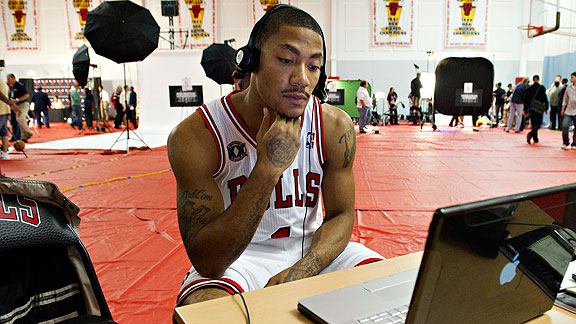 One thing Derrick Rose won't find on the Bulls' website during a lockout: himself.

Take a spin today through the NBA's digital space and you'll encounter the usual stuff.

There's a menacing Kevin Garnett atop the Celtics' site, with an image of Rajon Rondo on the right margin alongside a pitch to "Get Your Tickets Now" for the 2011-12 season.

At the Heat's site, you'll see an archive that contains Couper Moorhead's "Prized Possession" features, which include game footage to break down crucial plays.

David Stern has said that if negotiations progress between now and Thursday, there's a possibility the deadline for the current collective bargaining agreement could be extended. "We know how to stop the clock if we're close," Stern said.

Does it really matter if there's an extension of the CBA in July or a lockout? After all, there aren't any games nor do players get paid during this summer.

But for the guys who are in charge of those team websites and NBA.com, the pending deadline is a huge deal.

That's because the moment the clock strikes midnight on the current CBA, all those images and videos of NBA players have to disappear off NBA-owned digital properties. Depending on how you interpret "fair use," the prohibition could include the mere mention of a player's name on an NBA-owned site, though different teams have different interpretations of this particular stipulation.

Over the past few weeks, NBA website administrators and support staff have endured two-hour conference calls and countless planning sessions to figure out how to eliminate all these photos, highlights, articles and promotional features from the sites.

There are additional gray areas that are still up for discussion: What about a photo of a Lakers fan wearing a No. 24 Kobe Bryant jersey? What about a retrospective feature on the John Stockton-Karl Malone Jazz teams? Do tweets from the team's official Twitter feed that mention a player and/or link to an image need to be deleted? How about Facebook posts?

Nobody seems to know for certain the definitive answers to these questions and the criteria seem to be arbitrary. According to more than one team website staffer, the cutoff for images of retired players right now stands at 1992-93 -- Shaquille O'Neal's first season in the league. And social media is an area they're still grappling with as the deadline approaches.

However strict the boundaries, overhauling the architecture of these sites is a painstaking process that has a lot of talented web people around the league very stressed out. The NBA has built and furnished each team with a website "wire frame" that will take the place of the existing, much more sophisticated site. The wire frame is a rudimentary version of the site, without a lot of the snazzy technology we've grown accustomed to seeing. As a result, each of the 30 team sites will look virtually identical.

“We're going back to the stone ages of the Internet," said one team website administrator. "It's all going to be very dumbed down.”

In the meantime, staffers are going through thousands upon thousands of subpages, looking for any representations or mentions of NBA players.

What happens to all the old content? It gets put on a shelf. Webmasters will take the pre-lockout website and redirect it to an address that we’ll never find.

So if we're not going to be treated to Griffin dunks and Derrick Rose crossovers and Dirk Nowitzki one-leggers, what will we be able to find at team websites come the lockout?

But be careful! If an article on the Christmas food bank event includes a shot of Kevin Durant in a Santa hat, you can forget about it. And if Josh Smith happens to be standing in the margin of a photo of Harry the Hawk, that picture might be off-limits too.

It's no secret that team websites are far more about promoting the team than they are about providing the fan with hard news about basketball. That presents a major complication for those in charge of marketing the teams. How much can Rockets.com write about Clutch the Bear before fans tune out and go elsewhere for their Rockets fix?

"Content is going to be a major problem if we can't mention a player," said a team website administrator.

This dynamic poses a difficult problem for the digital marketing staff, as well. When teams approach companies with sponsorship contract offers, they promise a certain number of page views and impressions. For example, in a typical July or August, that number might be a couple of million page views from fans hungry for trade rumors and news from NBA Summer League. If traffic to the team's site is dramatically reduced -- which is inevitable if the only content on the site revolves around the dance team or a mascot -- teams will have to answer to some very unhappy sponsors.

The only winners out of this whole ordeal?