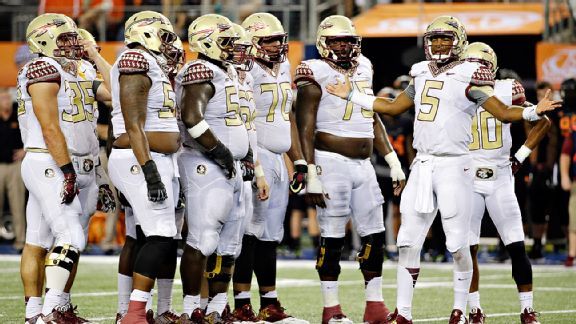 Despite two wins, Florida State has dropped from 1st to 4th in ESPN's FPI rankings.Florida State began the season with by far the best chance to enter bowl season undefeated, but a slower-than-expected start and the better-than-projected performances by many of its opponents have dropped Florida State to the third-best chance to run the table behind BYU and Oklahoma.

As noted, many of Florida State’s opponents have improved in FPI; Louisville, Notre Dame and Florida all jumped at least seven spots in the FPI rankings through two weeks.

In addition, the Seminoles had a 94 percent and 93 percent chance of beating Notre Dame (Oct. 18) and Louisville (Oct. 30), respectively, in the preseason. But after two weeks, that percentage is down to 66 against the Irish and 76 against the Cardinals.

Last season, Florida State won by an average margin of 39.5 points per game and had the highest average in-game win probability in the nation.

This season, Florida State has the 44th-best scoring margin (+15.5) and ranks 17th in average win probability.

Defense has been the biggest issue.

According to ESPN’s defensive efficiency, which measures how many points a defense contributes to its team’s net scoring margin and adjusts for the strength of opposing offenses, Florida State has been a below-average defense (85th in the FBS) this season after leading the FBS in defensive efficiency in 2013.