Only two programs in the ACC -- Florida State and Virginia Tech -- have had the same head coach for the past 10 years. A total of 27 different coaches have made their way through the conference in the past decade, and some of the best have been the least tenured. Only one, though, stands out above the rest when it comes down to wins and losses -- Virginia Tech’s Frank Beamer. Even though the Hokies have only been in the conference since 2004, no other coach has compared to Beamer’s six straight 10-win seasons. Others, though, like Duke’s David Cutcliffe, have made progress that isn’t as easily measured. Six of the following coaches were named the ACC's Coach of the Year at least once in the past decade. One major accomplishment separates the coaches at the top of the list from the ones at the bottom -- an ACC title.

Here’s a look at the ACC’s top 10 coaches over the past decade: 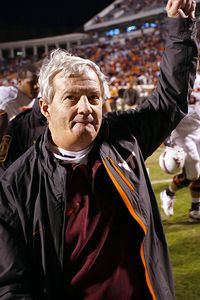 3. Jim Grobe, Wake Forest: After inheriting a 2-9 program from Jim Caldwell in 2001, Grobe transformed the smallest school in the BCS to a championship contender in the ACC. He led the school to the ACC title in 2006, its first since 1970 and second ever. He has only had one losing season in the past four.

4. Paul Johnson, Georgia Tech: His tenure is short, but his list of accomplishments long. After just two seasons, Johnson led the program to an ACC title, BCS bowl berth, and road win over rival Georgia. He has won 74 percent of his games (20-7) and put the team in the final top 25 in back-to-back seasons for the first time since the 2000-2001 seasons.

5. Ralph Friedgen, Maryland: Terps fans have suffered recently, but it was Friedgen’s first three seasons that earned him his lengthy 10-year contract in College Park. Three straight finishes of at least 10 wins and top 20 rankings, plus an ACC title earned the Fridge some clout.

6. Jeff Jagodzinski, Boston College: He left Chestnut Hill with his ego guiding him, but before he chased the NFL, Jagodzinski led the Eagles to back-to-back appearances in the ACC championship game, and compiled a 20-8 record in two seasons.

7. Tommy Bowden, Clemson: The former head coach finished no better than second place in the Atlantic Division and won 62.8 percent of his games. He also led the Tigers to four Top 25 finishes in the Associated Press rankings.

8. Al Groh, Virginia: He was named the ACC’s Coach of the Year in 2002 and 2007, both nine-win seasons that tied for second place in the conference or Coastal Division. He won 56 percent of his games and had two top 25 finishes.

9. Tom O’Brien, Boston College: It seems like O’Brien has been around forever, but he only had two seasons at BC while the program was in the ACC and just finished three at NC State. In ’05 and 06, though, O’Brien led the Eagles to 9 and 10-win seasons, respectively, and won bowl games both years to finish with two top 20 rankings. He also pushed NC State into the postseason with four straight regular-season wins in 2008.

10. Duke coach David Cutcliffe: Cutcliffe has guided Duke to a 9-15 overall record in two seasons. While it might not look like much, consider that the Blue Devils had won 10 games in the previous eight seasons combined. During that span, Duke had won just three conference games. They’ve won four in just two years under Cutcliffe. The 5-7 record in 2009 was the program’s highest win total since 1994.