Hidden amid the Super Bowl coverage last weekend was an interesting comment from NFL commissioner Roger Goodell, who hinted one of the game's most fundamental images could vanish.

The three-point stance could be outlawed as a safety measure to reduce helmet-to-helmet contact. Goodell, appearing Sunday on "Face the Nation," acknowledged the possibility while explaining to host Bob Schieffer even basic football chestnuts are on the table when it comes to addressing brain injuries. 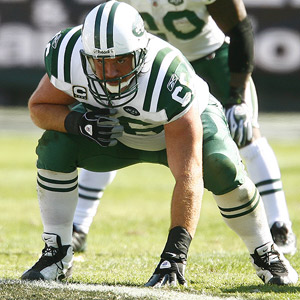 A rare sight in the NFL these days, Jets guard Alan Faneca still can be spotted firing out of a three-point stance."Theres nothing wrong with a good clean football game, however, sooner or later it might look like a totally different game," mistH2O wrote in the comments section of my feature on the long-lasting impact of head trauma in football. "They're going to consider taking away the three point stance! I don't watch football to see pansies with helmets play pattycake."

Two voices of reason say the three-point stance is moot.

One legendary analyst notes it's becoming as obsolete as the jump pass, fumblerooski and single-bar facemask. And a former NFL lineman from the Ivy League contends interior collisions don't cause concussions in the first place.

Last week, I attended the news conference for the inaugural Madden Most Valuable Protectors Award, given each year to the league's best offensive line. The New Orleans Saints beat out the New York Jets for one of the handsomest trophies I've seen -- five men crouched and ready to fire out of a three-point stance.

John Madden, the award's namesake, appeared via satellite. A reporter asked how offensive line play has changed over the decades.

"The three-point stance is out. Drive blocking is kind of dying out. I'm sure that bothers old offensive linemen, but it's a passing league, it's a spread league and it's a pass-protection league."

Whatever vestige of the three-point stance remains, former Buffalo Bills and New England Patriots offensive lineman Ross Tucker doesn’t see any reason to abolish it. Tucker is a Princeton alum and columnist for SI.com.

"You don't generate big hits on defensive linemen because you just don't get enough momentum," Tucker told me. "So I don't know what Goodell's talking about. I don't think that would fix the problem.

"I respect the fact that everything's on the table, but that's not something worth considering."