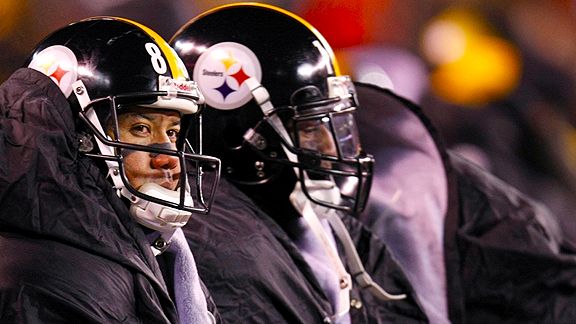 "It's embarrassing for me," Ward said after Pittsburgh's 13-6 loss to the lowly Cleveland Browns (2-11).

In a season when so many unexpected things happened to the Steelers, their playoff hopes, in all likelihood, ended in a place you’d least expect: Cleveland Browns Stadium.

Pittsburgh (6-7) needed a win over a team it traditionally dominates, but once again came out flat against an inferior opponent. The Browns took a 10-point lead into the second half and held on with a surprisingly stout defense to break a 12-game losing streak against their hated rival.

The game extends Pittsburgh's losing streak to a season-high five games. But its misery is something you cannot quantify.

The mood in Pittsburgh's locker room was very somber Thursday night. Players were generally confused about how a veteran team that was once 6-2 became such a downtrodden and struggling group just a month later.

"We’ve found different ways to not rise up in critical moments, and we’re losing football games because of it," Steelers coach Mike Tomlin said bluntly. "This one tonight, it really happened in all three phases."

It was difficult to decipher which team was fighting for a playoff berth and which was arguably the worst team in the NFL Thursday night.

For the third time in four games, Pittsburgh failed to establish its dominance early against a lesser opponent. The Browns dictated the pace of the game with an aggressive defense and outstanding play on offense and special teams from Joshua Cribbs (200 total yards).

Cribbs had a 55-yard punt return to set up Cleveland’s first field goal in the first quarter, and his 37-yard run set up the only touchdown of the game -- a 10-yard run by Chris Jennings before halftime. That was all Cleveland needed as it held Pittsburgh to just 216 total yards on offense and sacked quarterback Ben Roethlisberger a season-high eight times.

It was Cleveland's most impressive performance of the season, and in the process the Browns broke a seven-game losing streak.

"This is a lot more fun coming in here like this," Browns coach Eric Mangini said. "I’m just so happy for the guys."

Meanwhile, Pittsburgh is expected to miss the postseason for the first time since 2006, which was the last time the team failed at defending a Super Bowl title.

The Steelers entered the season claiming they learned from their experience three years ago, but the results have been eerily similar. Both years the Steelers suffered losing streaks and struggled to deal with injuries and adversity.

"Everybody is gunning for you," Pittsburgh linebacker James Farrior explained. "Each year, each team is different. And you can't say just because you had the same guys last year, it's going to be the same results. Each team has a different personality."

The Steelers' personality this year has been losing close games -- and often to bad teams. They've lost to four opponents with losing records this season, including three in the past month in Cleveland, the Kansas City Chiefs (3-9) and Oakland Raiders (4-8).

When Tomlin was asked Thursday if losing to the rival Browns for his first time as head coach was the lowest point of the season for Pittsburgh, he responded "That’s a safe assessment."

At this point, the best-case scenario for the Steelers is to win their final three games and hope for a lot of help. The Steelers have three tough upcoming opponents in the Green Bay Packers (8-4), Baltimore Ravens (6-6) and Miami Dolphins (6-6) to end the regular season.

"With three games left, you want to see who really wants to go out here and play for their pride, for this organization and for our city, and who doesn’t want to be around here," Ward said. "I know I’m going to continue to fight my tail off even though we’re not in the playoffs.