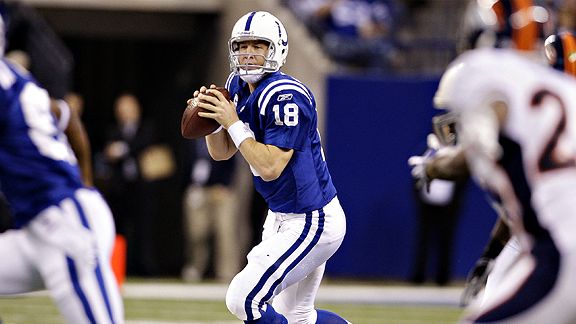 Will Peyton Manning's chances at a fourth MVP title suffer if the Colts rest him?INDIANAPOLIS -- His biggest accomplishment is leading his team to a place where he doesn’t need to make a major contribution over the next three weeks.

But after the Indianapolis Colts' 28-16 victory over the Denver Broncos at Lucas Oil Stadium Sunday, we might have seen the last full game of the regular season from Manning.

And if the regular-season final image of Manning depicts him with a dangling earpiece and under a poncho in Buffalo in Week 17 -- helping substitute quarterback Curtis Painter cope with the Bills -- how will that affect MVP voters?

Will they reflect upon Manning's accomplishments leading the Colts to a 13-0 start? Will that three-week-old memory have any impact while they're watching, say, Brees cap an undefeated regular season, or Favre carry the Vikings into the playoffs, or Johnson crack 2,000 rushing yards?

“I would say you can’t count it against him if he’s not out there,” Dwight Freeney said. “It’s about the team first, nothing else matters. …If it came down to that, it would be a shame.”

“The effect that he’s had on a team, I don’t know how you could match that,” said Colts kicker Matt Stover, who’s played with Phil Simms, Jeff Hostetler, Bernie Kosar, Vinny Testaverde and a slew of other quarterbacks in 20 NFL seasons. “What he does in practice, what he’s replicated on the field, warrants an MVP to me.

“I have never seen anything like it in my 20 years and that’s playing with a lotta, lotta, lotta quarterbacks. To me it’s ‘What has he done to give his team the best opportunity to win, to get his team to the playoffs?’”

With his play, Manning’s helped put the Colts in position to ease up. They are expected to stay true to a long-standing philosophy of resting key starters once playoff position has been secured, a stance honed by former head coach Tony Dungy and expected to be adopted by his successor Jim Caldwell.

No other quarterback has put his team in such a spot so early, so to penalize him for it in any way wouldn’t seem fair to me.

Colts executive Bill Polian made his traditional sour face when I asked him if MVP is important. He cares little for things voted on by media members and things he and his team cannot control, at least conversationally. Still, asked to make the case for his quarterback, it came easily.

I skipped Manning’s news conference after the Broncos game because I knew an MVP question would be fruitless and I’d fare better on this subject in the locker room.

But make no mistake, a fourth MVP would mean a great deal to Manning just as late yards in a blowout win at Tennessee on Oct. 11 meant something to him. Those yards got him over 300 yards for the fifth straight game at the start of the season. The milestone kept him on track to match or surpass the shared record of six, held by Kurt Warner and Steve Young. (He came up well shy of 300 a week later at St. Louis.)

That doesn’t mean Manning is at all selfish or has any priorities out of whack.

I just believe he’s acutely aware of the numbers and the history. He takes a great deal of personal pride in getting the first and making the other when he has the chance. None of that makes a second Super Bowl win any less important to him or the team he leads.

A year ago, en route to his third MVP, Manning and the Colts played at Jacksonville in a late-season Thursday night game. The Dec. 18 contest marked the Colts' 15th game. In a 31-24 victory, Manning was a pitcher with no-hitter control -- zipping balls through small windows, lofting them just over defenders' fingertips, throwing them with just the perfect touch.

That 29-for-34 passing for 364 yards and three touchdowns, broadcast nationally on NFL Network, clinched the award for him, I thought.

A week later in a meaningless game against Tennessee he threw early and often, and topped 4,000 yards. He helped get Harrison past Cris Carter into second place for career receptions, and then Manning left the game.

Certainly the Colts have many banged-up guys who need to heal. Some others can get the work they need to stay sharp during practice weeks. But the team’s first playoff game isn’t until Jan. 16 or 17, more than a month away. A month is too long to expect the engine to idle.

Nobody asked me but… I humbly propose the Colts set Manning loose on the Jaguars again in four days. Kelvin Hayden said even if the team takes its foot off the gas, it doesn’t want to drop a game to a loathsome division rival.

Manning will do what he’s asked to do. Still, he said he hasn’t liked playing a bit and then taking a seat when he’s been required to do it in the past. So don’t ask him to do it three consecutive weeks while risking the honor that would come with being the league’s first four-time MVP.

Let Manning be Manning in North Florida Thursday, with his stable of healthy weapons helping him stake his claim.

If Brees or Favre or Johnson or someone passes him from there as he plays only a couple series against the New York Jets (Week 16) and at Buffalo, so be it. At least the voters will have less time to forget what they should be sure to remember.