“The Raiders were born in Oakland, and Oakland will always be part of our DNA,” Davis said. “We know that some fans will be disappointed and even angry, but we hope that they do not direct that frustration to the players, coaches and staff.

“We plan to play at the Coliseum in 2017 and 2018 and hope to stay there as the Oakland Raiders until the new stadium opens. We would love nothing more than to bring a championship back to the Bay Area.” 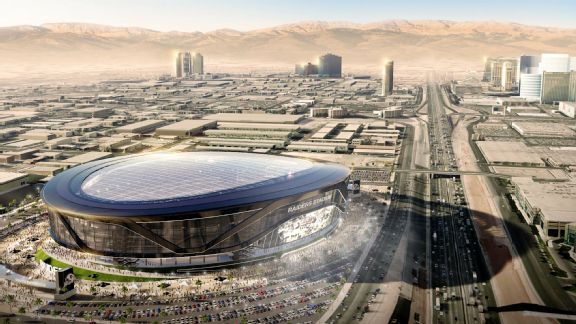 Here are some questions the Raiders will have to answer as they prepare to move to Las Vegas:

As Davis told reporters, the Raiders have consecutive one-year options to play at the Oakland Coliseum, and they plan to play there in 2017. The deadline for the Raiders to exercise the team’s option for the 2018 season is March of next year. The Raiders will continue to practice at the team’s facility in Alameda, California, while they remain in Oakland.

Davis said the team would pursue an agreement to play in the Coliseum for the 2019 season. According to ESPN NFL Nation Raiders reporter Paul Gutierrez, Davis has all but ruled out using UNLV’s current home, 33,500-seat Sam Boyd Stadium, due to outdated locker rooms and the lack of a proper security border around the facility. The Raiders could possibly play one preseason game per year at Sam Boyd Stadium before moving to Las Vegas permanently.

What will happen to current season-ticket holders?

The Raiders have started taking deposits on tickets for the 2017 season from current season-ticket holders. However, Davis said he would refund those deposits to fans who are upset with the team’s plan to move to Las Vegas. “If any of our fans have given deposits or anything for season tickets, we’d be like to refund them,” Davis said. “We’ll be happy to do that.”

When will the stadium in Las Vegas be completed?

The NFL facility in Las Vegas will include a domed stadium and will be shared with UNLV. A site for the new project has yet to be determined, but it will probably be just off the Las Vegas Strip and will seat 65,000. The stadium is slated to be completed in time for the 2020 season.

Will the Raiders change their name?

Although they have been approved to move to Las Vegas, NFL commissioner Roger Goodell said the Raiders will remain the Oakland Raiders as long as they are playing in Oakland.