SANTEE, S.C. -- As you enter the rural, tight-knit town of Vance, South Carolina, a message greets you in the form of a welcome-sign plaque. It reads, "Home of Mike Williams."

Here, friends and former coaches embrace their star with pride. Here, nearly 2,500 miles from Los Angeles, injuries that derailed what should've been a standout rookie season with the Chargers are mere whispers. Here, where more than 500 kids attempt to mimic the moves of their town's role model during his summer camp, Williams is already a hero.

"Everybody knows me out here. It's all good vibes," Williams beamed. "I feel like I am that example for the community so I'm just going to live up to it."

Williams hosted his first youth football camp July 21 at his old stomping grounds: Lake Marion High School. He admits to getting the idea after attending Philadelphia Eagles wide receiver Alshon Jeffery's youth camp and community fun day last July. At that time, Williams was in the midst of rehabbing his back.

A herniated disk in his lower back sidelined him for the entire offseason and first few games of 2017. Williams also fought off minor knee and hamstring injuries, leaving his new team and fan base with only glimmers of the talent he could provide.

The 6-foot-4, 220-pound receiver was targeted only 23 times in 10 games during his rookie campaign after being drafted No. 7 overall. Seven other Chargers had at least 25 receptions and three touchdowns, but Williams -- who averaged 15.4 yards per catch with Clemson -- caught only 11 passes for 95 yards. 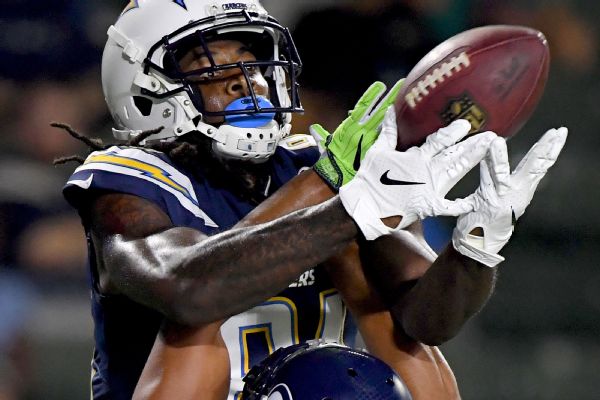 It was the type of season that could weigh heavy on the mind of a young talent trying to prove himself. The expectations put on a top-10 pick can weigh even heavier, but Williams is no stranger to adversity.

"I had been through a similar situation, so I already knew what it takes to get my body back to where it needed to be and be Mike," Williams said.

In 2015, following a 1,030-yard sophomore season that put Williams on the radar of NFL scouts, he was tackled into a goalpost while making a 4-yard touchdown reception on Clemson's first offensive drive of the season. The collision caused a neck-vertebrae fracture that would end Williams' season less than four minutes into the first game.

Clemson went on to make a historic run in the College Football Playoff. Williams spent the season watching from the sideline, restricted -- but also supportive, in the same manner as the neck brace that helped him heal.

He returned for his senior season and made 98 catches for 1,361 yards and 11 touchdowns.

That's why the injuries that surfaced during Williams' rookie season have not fazed him, but rather served as reminders to not take anything for granted.

But if Williams ever found himself in need of support, he turned to his rookie season roommate: former Clemson teammate and current Chargers receiver Artavis Scott. The undrafted free agent spent 2017 on the practice squad, elevating not only his game but also Williams' spirits.

"Just having him there, that helped a lot. I mean someone I could really actually talk to," Williams said.

"He was seeing me in practice, he was like, 'But that isn't Mike,'" Williams said. "He was someone who always, deep down inside, knew what I was capable of doing."

Fast-forward a year: A healthy and confident Williams plans to put his stamp on the Chargers this season. He had four catches for 56 yards in the preseason, including a 25-yard touchdown against the Seattle Seahawks.

In preparation for a breakout 2018, Williams did anything he could to make himself stand out. When he wasn't working on his route timing with future Hall of Fame quarterback Philip Rivers this offseason, the big-bodied target practiced yoga twice a week.

"Ever since I was doing yoga, I felt like my back and my body were feeling better, so I was doing a lot of yoga, a lot of stretching," Williams said.

Now after Williams has completed his first NFL training camp, all eyes are on him to see if the work has paid off.

Those close to him have seen it all before. When asked about what Williams can do in 2018, there's an air of confidence about the type of comeback that placed him near the top of draft boards to begin with.

"Mike, he's ready to get back on the field. He has a big chip on his shoulder. He's ready to show everybody what he can do, why he was a top-10 draft pick. He's ready to ball out," fellow South Carolina native and former college roommate Marcus Edmond said.

"Everybody has seen what I did after that my senior year, coming back out there and just dominating," Williams added. "I'm looking forward to doing the same thing this season coming up."

What exactly does that mean to Williams?