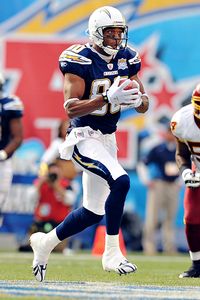 The Jets had the No. 1 ranked defense in the NFL in the regular season. New York features shutdown cornerback Darrelle Revis. If Revis is on No.1 San Diego receiver Vincent Jackson, watch for San Diego quarterback Philip Rivers to go to Floyd to ignite the passing game.

Floyd is the type of player that can open up San Diego’s passing game. The 6-foot-5 Floyd has become a major vertical threat for San Diego. Floyd, 28, developed this season and his progress helped prompt San Diego to cut starting receiver Chris Chambers in November.

Floyd has gotten better as the season has gone on. He had 45 catches this season and averaged 17.2 yards per catch. When he was the team’s top receiver in Week 17 against Washington (Jackson was being rested for the playoffs), Floyd had nine catches for 140 yards.

Rivers has many weapons to pick from. He has Jackson, tight end Antonio Gates, receiver Legedu Naanee and running backs LaDainian Tomlinson and Darren Sproles.

But Floyd is a special weapon because of his size and speed. He creates matchup issues. With New York having to account so many offensive options, watch for Floyd to try to burn New York deep a couple of times during the course of the game.