Arians said at the NFL owners meetings in March that he believed a woman could coach in the NFL if she could make players better.

Jen Welter's journey with the Cardinals 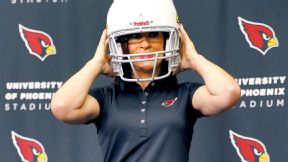 Wyman had Welter make the initial call to Arians. She reached out to Arians’ assistant, Wes Goodwin, but Welter never mentioned her own name. Goodwin relayed the message to Arians, who called Wyman. He told Arians about a 37-year-old woman in Texas who had played 14 years of football and coached linebackers in an indoor men’s league.

Welter's coaching internship with the Cardinals concludes with Sunday's third preseason game against the Oakland Raiders. Wyman and another male member of the football fraternity helped convince Arians to take a chance on Welter, who hopes to get another coaching opportunity in the near future.

Arians had earned Wyman's respect long before their first phone call. Wyman, who was a defensive tackle on New England’s 1996 Super Bowl team but was inactive on game day, said there are two coaches he would come out of retirement for: Pittsburgh’s Mike Tomlin and Arians.

Their conversation took place about a month before Wyman’s team, the Texas Revolution, began the Champions Indoor Football league playoffs in early June. From Wyman’s office, he told Arians about the Texas Revolution’s 2015 season, but they mostly talked about Welter.

Wyman said Arians wanted to know what it was like having a woman on his staff. So, Wyman shared.

He talked about how his staff consisted of four coaches, including Welter, who coached linebackers. Wyman was honest. He said some of the players Welter played with on the Revolution in 2014, when she spent a year playing with men, didn’t respect her when she started coaching them.

“The people who were around her [in 2014] never really took her seriously,” Wyman said. “They looked at it as a major joke.”

But once she began coaching them, Wyman said his players changed their opinion.

Having played for Bill Parcells in 1996, Wyman knew what a legendary coach looked like. He compared Welter’s film study to Parcells’, telling Arians how Welter is “great with breaking down film.” Wyman said some coaches break down film from “A to Z” to help their players understand what they’re watching, but other coaches -- like Parcells -- break down film from “A to C” to make it easier to understand. Welter does that, he said.

Wyman told Arians how Welter had helped save the marriages of three Revolution players. Welter, who has the benefit of a master’s degree in sports psychology and a doctorate in psychology, spent time talking with them and sharing her perspective of being a professional athlete in a relationship, Wyman said.

Wyman then remembered Arians asking if Welter would be willing to join the Cardinals staff as a training camp intern.

Arians ended the conversation by saying, “I’m really going to look into that,” according to Wyman.

The two coaches talked once more during the summer, Wyman said.

When Wyman first told Welter about his phone call with Arians the day they talked, she didn’t believe him.

“Really? Coach Bruce Arians? I know you know a lot of people, but really?” Wyman remembered her saying.

It took about a day for Welter to buy Wyman’s story, he said.

One thing Welter was adamant about was keeping the possibility of her joining the Cardinals a secret. She was scared that if she talked about it, the opportunity would disappear. It was hard for Wyman to keep it quiet. He knew it would motivate his players.

Then, one day, he slipped.

Wyman was preaching to the Revolution about taking advantage of opportunities. Then he mentioned that a team called about Welter. She wasn’t pleased.

“She came to me like, ‘Coach, I thought we weren’t going to say anything,’” Wyman said. “I said, ‘Jen, don’t worry about it. Everything’s going to work out.’ I said, ‘Those guys listen to half of what somebody’s saying anyway.'”

But Wyman wasn’t the only advocate for Welter.

When David Diaz-Infante, who spent the 2013 and 2014 seasons with the Cardinals as an offensive assistant working with the offensive line, heard about Arians’ comments at the owners meetings, he also thought of Welter. The two met years ago at a clinic and have stayed friends. Welter has been a frequent guest on Diaz-Infante’s radio show.

“I said, ‘Hey, I’ll talk to Bruce for ya.' Believe me, I know what it’s like. I can only imagine what it’s like to be a woman entering that circle, but once you talk to Bruce, he’s a guy that would totally do it,” Diaz-Infante said.

Diaz-Infante talked with Arians during Cardinals OTAs in May and made his case for Welter. He then stayed in touch with Arians through phone calls and text messages.

At one point, Diaz-Infante said Arians mentioned he hadn’t heard from Welter, so Diaz-Infante gave Arians’ number to Welter and later helped orchestrate her visit to Cardinals headquarters in Tempe.

She came to Arizona in late May to watch an OTA in person, seeing Arians in action.

“I saw the passion and energy of the person I’m looking for,” Arians said of Welter’s visit.

But Arians couldn’t offer Welter the job right then and there, she said.

“Bruce pulled me aside and said, ‘I don’t know yet if I can, but know it’s in my heart to try,’” Welter said.

Wyman pushed Welter to call Arians to follow up, but she was hesitant. She thought he’d be busy in late June, but maybe Arians wanted to know the Revolution were playing for their league championship a couple days later, she said to herself.

She made a phone call that changed her life.

“He’s like, ‘Oh, that’s great, Coach. You got a lot of work to do. Go ahead and win that thing. By the way, this internship is going to happen. I’ll give you details next week,’” Welter said. “I was like, ‘Wow that’s the greatest slap in the face of good news I’ve ever had in my life.’ It was like a whiplash of blessing. What just happened?

“That was definitely a surreal moment.”