So when the Arizona Cardinals took Murray first overall, Pugh, one of the Cardinals' starting guards, was given a front-row seat to Murray Mania. So how did Murray do? Through organized team activities and minicamp, Pugh thinks the rookie quarterback has fit the bill.

"Everything that I heard, he's lives up to,” Pugh said. "And I've heard a lot of good things, so it's been great so far.”

As the Cardinals enter their summer break before reuniting for training camp in late July, the early returns on Murray are in. He received high marks for his play on the field and his leadership and demeanor off of it.

• Imagine Rodgers at 45
• St. Brown not content with recognition
• Another dyanmic RB duo for Jaguars?
• Bills will be litmus test for Dolphins
• What Drake said that swayed Falcons
• The rise of Pat Surtain II

And there was nary any criticism of him from his teammates of all ages.

Sweezy knows a good quarterback when he sees one.

He blocked for Seattle Seahawks quarterback Russell Wilson for five of his first six seasons. In just a few weeks, Sweezy already can see the similarities between the two. Both are short -- Murray is 5-foot-10 and Wilson is 5-foot-11 -- both have a baseball background and both entered the league with an ability to run as well as pass.

"I see hundreds of similarities,” Sweezy said. "I always say, we got to see this guy really play. I think he's going to be just fine. But just to even be compared to Russell Wilson is a huge compliment.

Murray grabbed the nation's attention last season when he passed for 4,361 yards with 42 touchdowns and just seven interceptions in his lone season as a starter at Oklahoma. It was good enough to earn the Sooners a playoff bid and Murray the Heisman Trophy. And it hasn't taken Murray long to turn heads at the pro level, either.

"First off, he's faster and quicker than I thought when we got on the field,” running back David Johnson said. "I think a lot of people underestimate how great he can throw. He throws a dart. Accurate dart.

"Even in quarterback drills, seeing him throw it at the net and seeing him hit it five in a row. I think a lot of people underestimate his throwing ability.”

Murray's development in Arizona began further along the curve than other rookie quarterbacks because of his familiarity with coach Kliff Kingsbury's offense.

Murray began running portions of the spread and Air Raid in eighth grade and ran it primarily at Oklahoma, so he was able to hit the ground running during OTAs in May. It took just weeks for Murray's teammates to understand how he operates, Kingsbury said.

"As soon as he came in, he looked just as good as he does now,” wide receiver Kevin White said. "I think now, he is more fluid where everyone's on the same page, I would say, but he's a special talent.”

After finally getting his chance to coach Murray, whom he began recruiting to Texas Tech as a sophomore in high school, Kingsbury likes Murray's attitude -- especially when things don't go Murray's way. 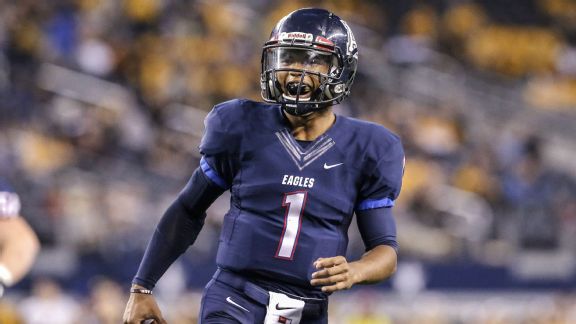 "He's going to take chances and this is the time to do it, see what you can get away with,” Kingsbury said. "If you want to go at [cornerback] Pat [Peterson] a couple of times, it's usually all it takes to learn.

"But no, he's aggressive in nature, the way he thinks and attacks when he's out on the football field, and I like that.”

Off the field, Murray already has caught the attention of some of the veterans with how he has handled himself. He has blended his skill on the field with his approach off the field, and it has earned him respect.

"He's shown nothing but great leadership and hard work and doing the right thing," Pugh said. "Once we get the pads on, we'll get a lot more of a feel for each other, and I'm looking forward to that."

Said outside linebacker Chandler Jones: "Kyler's confident, and he's not a cocky player. For him to be the first overall pick, he's a very confident player. He's composed. I can see him construct, I see him getting guys together in the huddle, and as a young guy, that's something that I admire about him.

"He's good at grabbing guys' attention. I'm not sure how tall he is, but I see his little helmet and I see a little helmet in the huddle. He's grabbing guys. I'm just, it's impressive. He's an impressive player. and I'm still sitting here watching him at practice getting a front-row seat to the No. 1 pick and the Heisman winner."