TEMPE, Ariz. -- There are state secrets, and then there is first-year coach Kliff Kingsbury's offense with the Arizona Cardinals.

Yes, they'll have an offense -- that much has been confirmed. Beyond that we've heard only whispers. What will it look like? Will it be a true Air Raid or an adapted one? Could he roll out a traditional, pro-style offense?

Unclear. One thing we know is that it doesn't have a name yet.

"It's an offense," rookie quarterback Kyler Murray said when asked for a name. "An explosive offense."

After a voluntary veteran minicamp, three weeks of organized team activities and a mandatory minicamp, little is officially known about Kingsbury's offense. In fact, Kingsbury said he has been tight-lipped about it because even he doesn't know exactly what it'll look like, and he might not until after the team gets through parts of training camp.

"I have a feeling how it's going to go, but we're going to do what we're good at," Kingsbury said.

Still, over the past two months, enough hints have been dropped that we can piece together an idea of the offense Kingsbury is developing. With a little bit of decoding and a few rounds of interviews through the locker room, here's what we know about the Cardinals' offense as we approach July:

• The Kelce's road to the SB explained
• Will Raiders trade, release or keep Carr?
• How Olave pushed through 'rookie wall'
• Why Wilson's Jets career hasn't taken off
• Kellen Moore's plans for Justin Herbert

It will utilize the shotgun. Earlier this offseason, center A.Q. Shipley said on The Pat McAfee Show that Arizona will be in shotgun "99%" of the time. While that is yet to be seen, what's almost certain is that the Cardinals will likely play out of the shotgun a lot.

"Probably more shotgun's our home, which is good because I did that in college, and we had a running quarterback," running back David Johnson said.

The Cardinals also have a running quarterback in Murray. Also, Kingsbury said he likes what he has seen from the Kansas City Chiefs, who lost in the AFC Championship Game with second-year quarterback Patrick Mahomes, who, coincidentally, is a Kingsbury disciple. They went shotgun "80%-plus," Kingsbury said.

It will be fast-paced. Johnson said the plan is go up-tempo -- so much so that he said the offense will have to "get used to no-huddle."

"We're going to get the ball down the field as fast as we can," Johnson said. "We're trying to get a lot of plays in the game."

Just how many plays is Johnson talking? About 90 to 95 per game, he said. That has never been done before, according to ESPN Stats & Information. No team has averaged 80 offensive plays per game. In fact, it's rare for a team to run 90 plays in a game at all. There have been only 66 instances in which a team has reached that mark in a game, including overtime games, in the Super Bowl Era.

Even if it's fewer than 90 on average, it's sure to be a lot of plays, and thinking critically in an offense that fast will be the hardest part about playing in Kingsbury's offense.

"You want to have that fine line of not thinking too much, but we want to have enough in that we can still be attacking," Kingsbury said. "Kind of given the illusion of complexity out there. And so, I think when we start going fast, sometimes it freezes guys up, but once they get accustomed to it, they can pick it up."

Kingsbury said the Cardinals aren't going to play as fast as they can every play. The intention, he said, is to find a pace that'll be comfortable for Murray, one that gives him a chance to see and evaluate the defense.

"I want him to be able to work in a good rhythm," Kingsbury said. 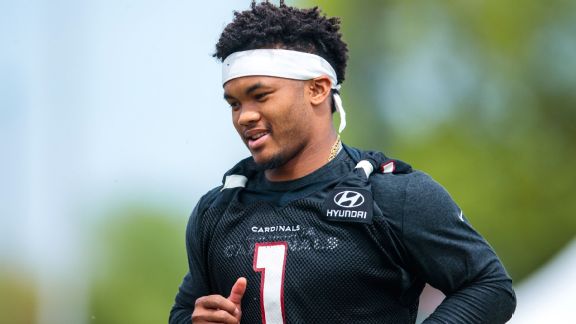 The biggest adjustment for Kingsbury in developing his offense will be the hashmarks. In the NFL, they're 18 feet, 6 inches apart. In college, they're 40 feet apart, allowing for an entirely different type of spread offense to be employed. Kingsbury said he has used OTAs and minicamp -- and plans to use training camp -- to try new concepts with the shorter hashmarks.

However, Kingsbury said "a lot" of his spread concepts carry over. His is a plan that has his players excited.

Said Johnson: "I think it's going to be really helpful because only having to worry about one guy tackling you compared to three, four guys loading the box."

It will be balanced. Even though Kingsbury is trying to keep his scheme a secret, there's one misnomer floating around, he said.

Kingsbury has been adamant that his offense will be fluid on a game-by-game, play-by-play basis.

"We just try to do things that we think the defense will struggle with," Kingsbury said. "If it's run it every play, we'll run it every play. If we got to throw it a bunch, we'll do that as well. Basically, take what they give you."

Guard J.R. Sweezy broke it down in simpler terms: "It is the NFL. Everybody knows you got to be balanced."

David Johnson will be a focal point. Johnson believes he'll be used "similar" to how he was under former coach Bruce Arians in 2016, when Johnson had 2,118 all-purpose yards.

"I think I'll be utilized as a running back and a receiver," Johnson said.

The ratio of Johnson's snaps at running back and receiver is yet clear, but he believes it'll come down to the defenses more than anything else.

Kingsbury said Johnson "could have a pretty extensive role in this offense." That could mean asking him to carry the ball 35 times or catch 10 passes, Kingsbury said. But balance will be necessary to keep Johnson fresh.

Final analysis? Cardinals outside linebacker Chandler Jones is among the players most qualified to opine on the team's new offense. After all, he has already experienced the stresses that this still-developing offense can present.

"You just have to be sound in order to defend this offense," Jones said. "Everyone has to do their job, and if you don't, they'll definitely catch you."

We'll know more in training camp, but it's unlikely that Arizona will run any of its scheme during the preseason. We might not know what this offense will look like until the season opener against the Detroit Lions on Sept. 8.

No matter what it looks like, though, there's one thing we know for certain.