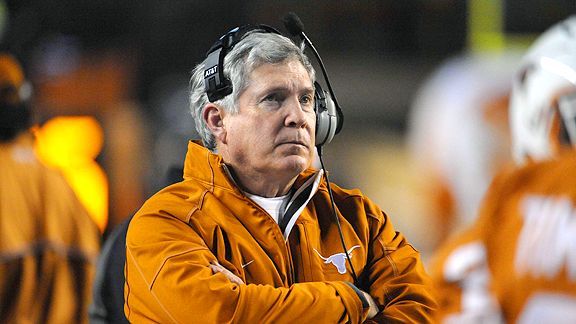 Mack Brown and the Texas Longhorns have gone a combined 13-12 over the last two seasons.After posting nine straight 10-win seasons from 2001-2009, Texas has slipped to 5-7 and 8-5 over the last two years. Even worse, the Longhorns are just 6-11 in Big 12 play. It is believed there is a lot of talent on the field in Austin, but how much talent is there?

For the first time since 1993-1994, Texas failed to produce a first-round pick in consecutive years.

For the first time since 2000, Texas did not have a player selected in the first three rounds in the NFL draft.

So what are the biggest reasons for the Longhorns' struggles the past two years?

First, they haven't been able to protect the football. Their 56 turnovers are the most by any AQ school over that span.

They haven't been able to replace record-setting QB Colt McCoy.

In 2009, McCoy threw 27 touchdowns in leading Texas to the BCS Championship Game. Since then, three different Texas quarterbacks have combined to throw 26 touchdowns, with a conference-high 32 interceptions. Their struggles in the red zone are highlighted in the chart below.

Texas has to get better in the red zone in 2012, especially when passing the ball. The Horns ranked dead last in the FBS last season in yards per pass attempt in the red zone (1.6).

Home-field advantage at Darrell K. Royal Texas Memorial Stadium is nonexistent these days. Texas is 2-6 in Big 12 home games the past two years, with the two wins coming last year over Kansas and Texas Tech. Those two were a combined 2-16 in conference games last year.

In the past two years, just seven AQ teams have won fewer than two conference home games, and three others have won exactly two (Northwestern, Texas Tech and Vanderbilt).

Under new defensive coordinator Manny Diaz, the defense was strong statistically, especially against the pass. The Horns allowed only two touchdown passes of 20 yards or more in 2011, tied for fewest among all FBS teams -- with LSU and Alabama. Both of those touchdowns the Horns allowed came against Heisman winner Robert Griffin III and Baylor.

On the flip side however, in four games against ranked teams (all losses), Texas allowed 39.5 points-per-game. Eliminate Kansas State, and that number balloons to 47.0 points-per-game in losses to Baylor, Oklahoma and Oklahoma State.

With both Case McCoy and David Ash returning at quarterback, and Malcolm Brown, Joe Bergeron and highly touted freshman Johnathan Gray at RB, this could be the year where the Texas clicks on offense. If it doesn’t, what changes could be in store for 2013?