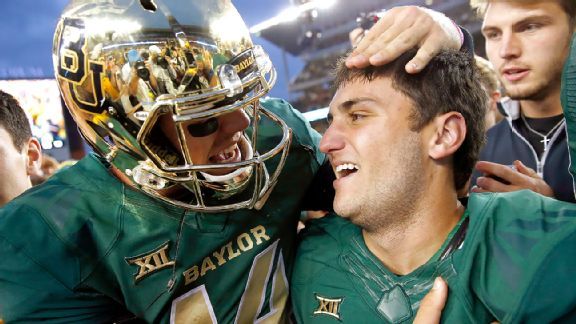 Bryce Petty and kicker Chris Callahan survived TCU. The teams are part of the top-heavy Big 12. The “hot” debate entering the season was whether the Pac-12 could surpass the SEC as the top conference in the nation. The Big 12 was rarely mentioned as a top conference, however, despite returning the majority of its starting quarterbacks and having two of the top five defenses in ESPN’s preseason defensive efficiency rankings.

Five of the Big 12’s 10 teams are in the top 15 of The Associated Press poll, tied with the SEC (which has 14 teams) for the most top-15 teams in the nation. Baylor, TCU, Oklahoma, Kansas State and Oklahoma State all have one or fewer losses and a legitimate shot at the College Football Playoff.

All of those teams will not finish the season with one loss, but it’s worth noting that two of their losses came in close games against the teams that played for the 2014 BCS National Championship (Auburn defeated Kansas State and Florida State defeated Oklahoma State).

The bottom of the Big 12, however, is not as strong as that of the Pac-12 or SEC. The Big 12’s average FPI ranking, which is designed to measure a conference’s depth, ranks below that of those two conferences.

The SEC remains at the top of the conference power rankings. It has the top team in the AP poll (Mississippi State) and in the FPI (Auburn), the two components of these power rankings. The SEC West remains unbeaten against any team not in the SEC West as the Magnolia State has catapulted to the forefront of the college football world.

The Pac-12 will rise in the conference rankings if its top teams can continue to win. Last week, we discussed how the Pac-12 is missing an elite team. Oregon looked strong against UCLA, and the defenses of Stanford and Washington defenses looked solid against explosive offenses in Week 7. The issue is that the Pac-12 does not have a team in the top eight of the AP poll.

In other conference action, next week is a big one for the ACC as Notre Dame heads to Florida State. The Seminoles are the best team in the ACC, but if they lose to Notre Dame at home, the conference could take a big hit in perceived strength and in the College Football Playoff race.