The Big 12 has had more top three finishers in the Heisman Trophy voting in the last decade than any conference.

And although the Big 12 had three Heisman winners during that time, the three most memorable players of the decade didn’t claim college football’s top individual award. 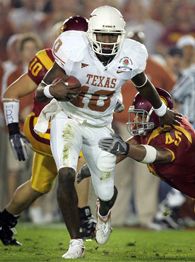 1. Vince Young, Texas: Transcendent talent who capped his career by scoring the game-winning touchdown to lead his team to the national championship. Finished his career with a 30-2 record, 6,040 passing yards and 3,127 rushing yards.

2. Adrian Peterson, Oklahoma: Likely would have had a chance for a Heisman if he had stayed for a senior season or not had his junior season marred by injuries. Still finished with 4,045 yards to finish within 73 yards within Billy Sims’ school career record.

3. Ndamukong Suh, Nebraska: Destined to go down in history as the greatest Blackshirt of all time. Capped his career by winning the Lombardi, Bednarik and Nagurski Awards, finished fourth in the Heisman and became the first defensive player to win the Associated Press’ player of the year.

4. Sam Bradford, Oklahoma: First quarterback to direct his team to back-to-back Big 12 titles, capped by winning the Heisman Trophy as a redshirt sophomore in 2008. Injured early in his junior season, he still finished his college career with 88 touchdown passes against 16 interceptions.

5. Michael Crabtree, Texas Tech: Claimed back-to-back Biletnikoff awards as the most dominant and productive receiver of his era. Won the award in his second season despite being hobbled by a sprained ankle that limited his productivity.

6. Roy Williams, Oklahoma: Dominant and productive safety who was so good that Bob Stoops created a position, “the Roy,” to showcase his talents. Claimed the Nagurski and Thorpe Awards and was a unanimous All-American in his final college season.

7. Derrick Johnson, Texas: Two-time All-American earned the Butkus and Nagurski Awards in his senior season, capping a career as one of the most illustrious defensive players in Texas history.

8. Eric Crouch, Nebraska: Multi-talented runner/passer cemented his Heisman Trophy in 2001 with his pass-catching abilities against Oklahoma. That big effort helped catapult the Cornhuskers into the national championship game as a senior. Finished his career as the leading rusher quarterback and leader in total offense in Nebraska history.

9. Jason White, Oklahoma: Surrounded by a bevy of top talent, led the Sooners to the national championship game in back to back seasons and claimed the Heisman Trophy Award as a junior in 2003. Claimed back-to-back Davey O’Brien Awards, finishing his career with 8,012 passing yards and 81 touchdowns.

10. Colt McCoy, Texas: The winningest quarterback in college football history, finishing his career with an NCAA record 45 wins. He finished with virtually every passing record in school history winning the Walter Camp Football Foundation Player of the Year, Maxwell Award, Davey O’Brien Award, Johnny Unitas Golden Arm and Manning Award in a hard-luck senior season capped by an injury that didn’t allow him to complete the national championship game.