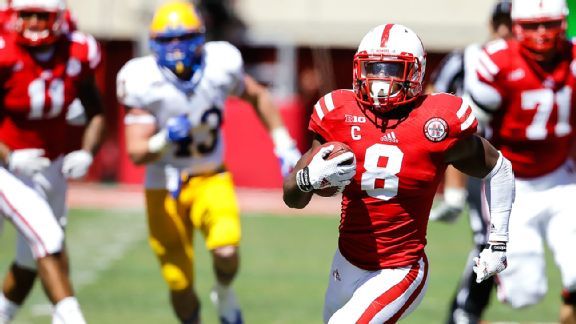 Ameer Abdullah has run for 41 percent of Nebraska's rushing yards this season.Ameer Abdullah might have already had his “Heisman Moment.” With Nebraska tied with McNeese State late in the fourth quarter in their Week 2 game, Abdullah took a three-yard pass, broke three tackles and ran 55 yards for a 58-yard catch-and-run touchdown.

Not only did that reception give Nebraska the lead with 20 seconds remaining, but it also gave Abdullah more than 100 yards from scrimmage, something he has done in every game since the start the 2013 season.

Abdullah has a streak of 16 games with at least 100 yards from scrimmage, the longest active streak in the FBS and fourth-longest streak for a running back in the last 10 seasons.

Given Abdullah’s streak, it should not be surprising that he leads all FBS players with 2,423 yards from scrimmage since the start of last season.

During that time, he has had the second-most offensive touches (368) in the FBS and is averaging 6.6 yards per touch, the 12th-best average in the FBS (min. 200 plays).

What has made Abdullah successful?

Abdullah has been the catalyst for this offense.

Nebraska ranks eighth in the nation in rushing yards per game (324.3) this season and second in yards per rush (7.4).

Abdullah is one of the most versatile running backs in the nation.

He is the only Power Five running back with at least 900 rushing yards both inside and outside the tackles since the start of last season.

During that time, Abdullah has gained 1,135 rushing yards outside the tackles, fourth-most in the FBS.

Ameer Abdullah Rushing
Since the Start of Last Season

Abdullah is productive and consistent.

Since the start of last season, Abdullah is averaging 130.4 rushing yards per game, seventh-most in the FBS.

He leads all FBS players with 13 100-yard rushing games.

He has 83 rushes in which first contact was not made until 5 yards past the line of scrimmage, tied with Washington’s Bishop Sankey for the most by any Power Five player.

That said, this week could be a challenge for Abdullah with Miami (FL) coming to Lincoln. The Hurricanes have allowed 2.0 yards per carry this season, fourth-best in the FBS.

If Abdullah can have a big game against one of the best rushing defenses in the FBS on national TV, it could vault him up the Heisman Watch list.