A winning bowl record is on the line for both the ACC and the Big Ten as No. 9 Georgia Tech takes on No. 10 Iowa in the FedEx Orange Bowl on Tuesday night (Fox, 8 p.m. ET). Georgia Tech makes its first Orange Bowl appearance since 1967, while Iowa hopes for a better showing in Miami after getting crushed by USC 38-17 in the 2003 game.

As kickoff approaches, bloggers Heather Dinich (ACC) and Adam Rittenberg (Big Ten) break down an intriguing matchup that has largely flown under the national radar. 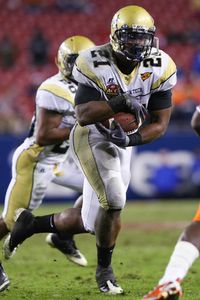 Georgia Tech has a lot of weapons on offense, including running back Jonathan Dwyer.Heather Dinich: Well, Adam, it's almost time for the showdown of the two conferences whose recent bowl history has been suspect at best. Both the Big Ten and ACC have 3-3 records this postseason entering the Orange Bowl. Consider this game the tiebreaker. It’s been one of the most difficult games of the season to predict, but I think Georgia Tech's offense will come through as it has all season, the ACC will finish with a much-needed winning bowl record and the Big Ten will fall to 3-4 in the postseason. Besides, the Big Ten only has three teams with winning bowl percentages (granted, Iowa is one of them), so why should this year be any different?

Adam Rittenberg: You're right about the records, HD, but I'd like to challenge the ACC or any other league to go through the Big Ten's bowl lineup. No other lineup comes close in terms of difficulty with matchups and locations. I doubt the ACC would enjoy facing USC in its backyard every Jan. 1, especially after stumbling in all those Orange Bowls. I definitely agree with you about picking this game. It ain't easy (more on that later). Let's talk more about the game's premier matchup, Georgia Tech's triple option offense vs. Iowa's fundamentally sound defense. The Hawkeyes are very solid in all three phases of their defense, especially the front seven with Adrian Clayborn, Broderick Binns, Pat Angerer and others. Veteran defensive coordinator Norm Parker has had about a month to prepare for the triple option, and it still might not be enough time to stop Jonathan Dwyer and Josh Nesbitt.

Do you think a team has a major advantage with more time to prepare for Georgia Tech's offense, or are the Yellow Jackets simply too good on that side of the ball?

Dinich: As Iowa coach Kirk Ferentz said, there is simply no way for Iowa – or any other team for that matter – to simulate what Georgia Tech can do, in terms of the precision, speed and playmakers who will execute it on Tuesday night. Yes, there is some advantage to having more than a week to prepare -- both Clemson and Miami devoted some of their summer camp to getting a head start on that conference game and it paid off (especially for Miami). The key is how long it will take Iowa’s defense to get comfortable with it? Norm Parker will have his players as prepared as they can be, and Iowa has the discipline it will take to stop them, but my question is whether or not the Hawkeyes have the offense to keep Georgia Tech off the field. The best defense against the Jackets is for Iowa to sustain its own drives and control the clock. Do the Hawkeyes have the offensive line to make that happen?

Rittenberg: That's an excellent question, Heather. Iowa's offensive line gets a lot of accolades, and the group boasts two first-team All-Big Ten performers in tackle Bryan Bulaga (Big Ten Offensive Lineman of the Year) and guard Dace Richardson. But most of us who have watched Iowa all season agree that at times, the line has underachieved. It's far from a bad O-line, but Iowa certainly has the potential to stall. According to ESPN's Stats & Information group, Iowa averages just 3.3 yards rushing on first down, which is seventh worst in the country. The Hawkeyes should have backs Adam Robinson and Brandon Wegher on the field Tuesday night, and Richardson's return from injury will be huge, but they'll need to run the ball decently to set up the play-action passing attack. The line also needs to keep Derrick Morgan away from Ricky Stanzi, which won't be easy.

I was struck by something you wrote Monday, about Georgia Tech not being a catch-up team. That description fits Iowa, which has rallied in eight of its 10 victories. Iowa has been a pretty average team in the first three quarters, but a great one in the fourth.

Should Georgia Tech grab the early lead, how do you see things playing out? 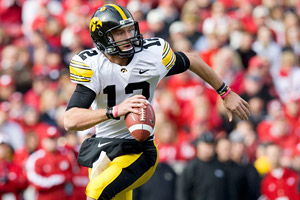 Iowa quarterback Ricky Stanzi's Hawkeyes have come from behind in eight of their 10 victories this year.Dinich: If Georgia Tech starts fast, it could be a long night for Iowa. On the flip side, though, it could make for one heck of an interesting fourth quarter. We both know Iowa has been one of the most exciting teams in the country to watch in the final minutes, but Georgia Tech has come from behind in seven of its last eight games, including in the ACC championship, when it trailed Clemson 34-33 in the fourth quarter. In fact, they had to come from behind to beat Clemson both times this season. I’ll be honest, I have no idea who’s going to win this game, but I think how Iowa’s defense starts will go a long way in revealing that answer to that. So what’s your final prediction on this one, Ritt?

Rittenberg: Ah, so they are a catch-up team. You trying to trick me, HD? As you know, Georgia Tech has several NFL-ready players and an offense that seems to be working well in other bowl games (Air Force, Navy). But having been around Iowa a lot this season, I can say there's something special about this Hawkeyes team, which just won't go away and continues to find ways to win games. The combination of Parker with a month to prepare and Stanzi's return to the lineup gives Iowa enough confidence to pull out another thriller, in come-from-behind fashion, of course. Iowa wins this one, 28-27. What say you?

Dinich: Haha yes, always trying to baffle the Big Ten. :) But really, if Iowa is the hot team early, that means they've figured Georgia Tech out, and the Jackets won't be able to overcome that, especially knowing how they've struggled defensively. That being said, I think Paul Johnson controls the clock, Stanzi gives up a gift or two (not five) and GT wins, 28-24. And knowing my picks and the ACC, that adds up to a win for the Hawkeyes.