Celtics guard Ray Allen was named the 2009-10 NBA Sportsmanship Award winner for the Atlantic Division on Monday, making him a finalist for the award that honors a player who best represents the ideals of sportsmanship on the court. 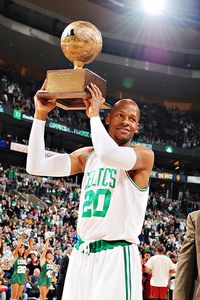 Ray Allen with another of his many awards.This year's six divisional winners, as selected by a five-member panel of former players, are Allen, Atlanta’s Al Horford, Cleveland’s Antawn Jamison, Denver’s Chauncey Billups, Houston’s Louis Scola and Phoenix’s Grant Hill. The NBA will announce the league-wide winner after the regular season.

After the jump, you'll find a complete list of sportsmanship award winners since 1996. Allen previously won the award with Seattle in 2002-03.