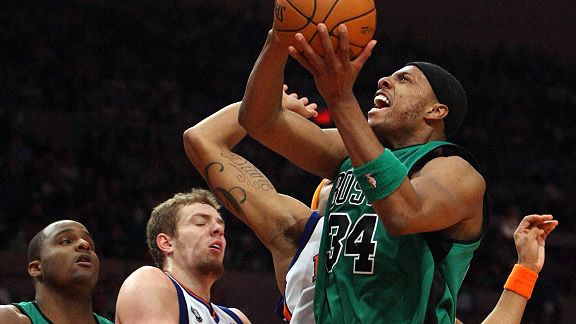 Paul Pierce goes hard to the basket.Instant reaction after the New York Knicks posted a 104-101 triumph over the Boston Celtics Tuesday evening at Madison Square Garden:

How the game was won: Danilo Gallinari poured in a career-high 31 points on 10-of-15 shooting and scored the go-ahead basket in the final minute to lift the Knicks to victory. Former Boston reserve Bill Walker started and added 10 points (in spite of 2-of-10 shooting), while recent NBA Development League call-up Earl Barron added 17 points for New York. Ray Allen paced five Celtics in double figures with 17 points.

Turning point: The Celtics entered the fourth quarter trailing by eight, but their bench, featuring Nate Robinson getting some extended time against his former team, erased the deficit by scoring the first nine points of the frame. Robinson splashed a 3-pointer early in the run, then assisted on a jumper by Glen Davis. Michael Finley's 3-pointer with nine minutes to go put Boston out front 88-86.

Turning point II: After rallying, Boston let New York right back into the game. Clinging to a 101-100 lead in the final minute, Gallinari banked in a straightaway toe-on-the-line jumper with 36.8 seconds to play. Paul Pierce gave the ball up at the other end with a haphazard wraparound pass and David Lee added a bucket with 7.3 seconds to go for a three-point advantage. Boston couldn't even get off a final shot (and Rasheed Wallace's rushed attempt after the whistle wasn't even close).

Stat of the game: Barron, a 7-foot forward who spent his first three years in the NBA with the Miami Heat, registered 17 points and 18 rebounds over 44 minutes in only his second appearance since the Knicks signed him to a 10-day contract while a member of the Iowa Energy of the D-League.

Unsung hero: Robinson, who finds himself on the outside looking in on Boston's playoff rotation, didn't do anything that will cause Doc Rivers to immediately revisit that decision, but he did chip in 5 points, 5 assists and 3 rebounds over 14 minutes. He finished with a plus-8 in the plus/minus category. Honorable mentions: Tony Allen grabbed six rebounds in 15 minutes off the bench, while Davis chipped in 12 points on 4-of-6 shooting over 18 minutes in yet another inspired bench effort.

What it means: Can't say you didn't see this one coming. True to their inconsistent ways, the Celtics endured what's almost become a prototypical letdown after Sunday's win over a Cleveland team with the best record in the NBA. The Celtics let the Knicks hang around the entire night and, of greatest concern, the starters couldn't hold a lead the bench secured with an early fourth-quarter rally. On a night the Bobcats upset the Hawks, the Celtics gain no ground in the race for the No. 3 seed.