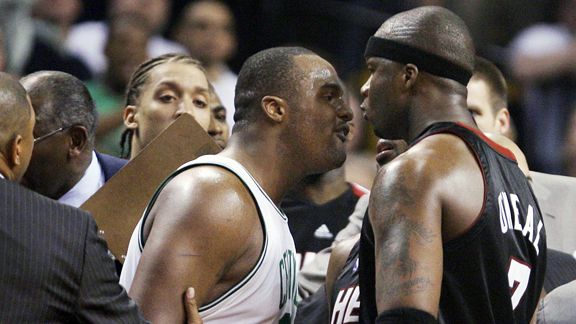 GLen Davis and Jermaine O'Neal were in the middle of Saturday's scrum.BOSTON -- A glimpse at the ESPN stories from Boston's Game 1 victory over Miami Saturday:

By the time the pushing, shoving, elbowing and jawing commenced late in the fourth quarter, and well before Quentin Richardson dismissed Paul Pierce and Kevin Garnett as "actresses," it was already too late for Dwyane Wade and the Miami Heat. 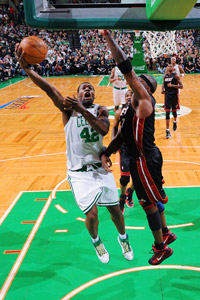 Tony Allen goes hard to the basket.He, and they, had already had the life smothered and squeezed out of them by Tony Allen, the designated defensive specialist on one of the league's most intense defensive-oriented teams.

For the first 27 1/2 minutes, this game was all Miami. For the final 20 1/2, it was all Boston -- and all because of the lesser-known of the Celtics' two Allens, the one without the sweet jump shot, the nine All-Star appearances and the Jesus Shuttlesworth movie role on his resume.

That other Allen, the one named Tony, put on a display of defensive proficiency against Wade that rendered the superstar a non-factor for a key long stretch of the second half as Boston came back from a 14-point deficit and defeated Miami 85-76 Saturday night in a game that featured a full-blown skirmish (not a fight, however, since there needs to be at least one punch thrown to qualify for a fight) with 40 seconds left that prompted Q-Rich to go after Pierce and Garnett afterward with everything short of a wheelchair reference.

But by then, this one was decided. And Allen was the reason why.

Click HERE to read the story in today's Daily Dime.

There it was, the pre-recorded plea for all to see and hear. Paul Pierce, on the Jumbotron, reminding Celtics fans that it was, indeed, the playoffs, and to respond accordingly. 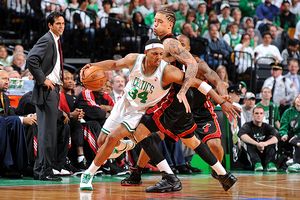 Paul Pierce shook off a tough shooting night to pace the Celtics.Only problem: Pierce and the Celtics were playing like it was Game 83 of the uninspiring regular season they had just supposedly ended. They were losing. They looked detached. Their coach even told his players they looked as though they had quit.

It was midway through the third quarter and Miami was starting to pull away in Game 1 of the Celtics-Heat playoff series. Dwyane Wade was going into full Mariano Rivera mode a bit earlier than usual, scoring 10 points in a 15-2 run. The Celtics, meanwhile, were doing all the same, stupid things they had done so often in Games 1-82: too many turnovers, too many missed easy opportunities, surrendering the boards. When Wade went through the lane and casually tossed in a 10-foot floater, the Heat led 61-47 with 7:03 left in the game.

Pierce then heeded his own entreaty, snapping out of a funk and, in the process, dope-slapping the Celtics back into the here and now. The defense kicked in, which was a welcome sight to Celtics fans. So, too, was the sight of No. 34 at the other end of the floor. He had a team-high 16 points and the Celtics overcame their regular-season ways to take an important, if inelegant, 85-76 victory.

"We pride ourselves on our defense,'' Pierce said. "But at the end of the day, you do have to put the ball in the bucket."

Forsberg: The spark they've been missing?

Before Saturday, the Celtics and Heat didn't have any playoff history. But in the fracas that ensued in the waning moments of Boston's 85-76 Game 1 triumph, this series ratcheted up to an intensity typically reserved for Celtics-Lakers. 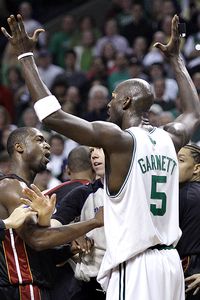 Kevin Garnett jaws with the Heat during a fourth-quarter fracas.Tempers flared after Paul Pierce tumbled to the ground in front of the Miami bench with an apparent right shoulder injury with 40 seconds to play. Miami's Quentin Richardson stood defiantly over Pierce and suggested he was exaggerating the injury, to which Kevin Garnett took umbrage and expressed such with an elbow to Richardson's head when pushing and shoving ensued.

After the game, Richardson sounded off on Pierce and Garnett, calling them "actresses" and summing up his feelings on the pair by saying, "I don't like them and they know it."

The Celtics have enough troubles now as, if the NBA keeps with past precedent, Garnett -- who was assessed with two technical fouls and was ejected -- is likely to be suspended for at least one game for the elbow incident.

But it might be Richardson's tirade that leaves the biggest mark on this series.