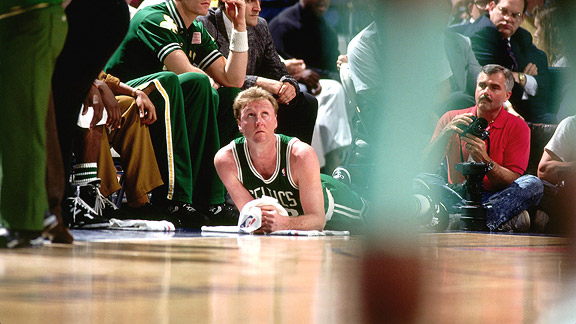 The only time the Celtics didn't win a series after boasting a 2-0 lead, Larry Bird's back was acting up in 1990.While detailing the prime position Boston finds itself in up 2-0 over the Miami Heat in the teams' first-round, best-of-seven series, we neglected one incredible stat: The Celtics have been up 2-0 in a series 44 times in franchise history and failed to advance just once.

The Celtics' lone playoff loss in those 44 matchups came when the New York Knicks won the final three games in a best-of-five, first-round series in 1990. That, too was a matchup of fourth (Boston) and fifth (New York) seeds, but let's just say there wasn't a whole lot of defense in that series. Check out the game scores:

The Knicks proceeded to lose to the eventual NBA champion Detroit Pistons in five games in the conference semifinals.