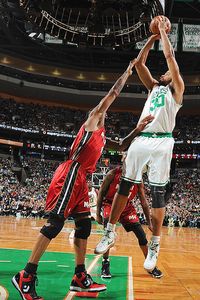 The announcement was made Thursday by NBA executive vice president of basketball operations Stu Jackson.

Wallace, who opened Monday's session with the media by noting he didn't want to talk about the Paul Pierce-Quentin Richardson-Kevin Garnett fracas, did sound off about picking up two quick fouls in Game 1.

"That’s one thing I always try to tell the guys," Wallace said. "We also have to look out for the Wade factor. You know how that is, with the TV ratings and all this. Not taking away or saying that he’s not a good player, don’t get me wrong, but I mean, come on. You know what it is. It’s about the business game as opposed to the basketball game."

Wallace got called for a technical foul in the first half of Tuesday's Game 2 when he shoved the Heat's Jamaal Magloire as the two got arm-locked under the basket after a Miami make. Wallace did not talk to reporters after the game.

This is the third time Wallace has been fined this season for criticizing officials. His season total is now an even $100,000.

"[The officials] don't like tough defense on [Dirk Nowitzki], so, of course, I get a whole lot of [expletive] calls," Wallace said after Monday's game in which foul trouble limited his minutes. "That's how the story goes, I'm not worried about it. We'll see them again."

"They've got to know that [Hedo Turkoglu is] a damn flopper," said Wallace. "That's all Turkododo do. Flopping shouldn't get you nowhere. He acts like I shot him. That's not basketball, man. That's not defense. That's garbage, what it is. I'm glad I don't have too much of it left."