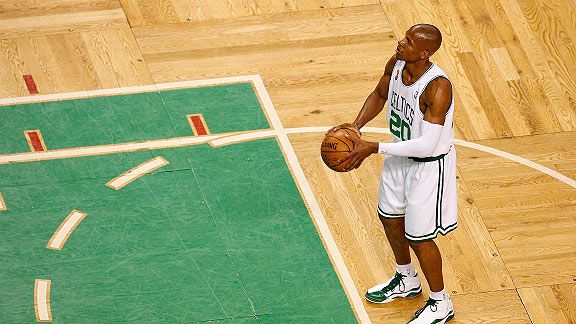 It wasn't a charity stripe for Ray Allen Sunday vs. the Heat.MIAMI -- Exactly how much of an oddity was it for Celtics guard Ray Allen to miss three consecutive free throws in Boston's Game 4 loss to Miami Sunday? Consider the following:

* Allen is a career 89.4 percent free-throw shooter and that number actually jumps up to 90.1 percent in the postseason.

On Sunday, Allen missed his final three attempts at the stripe after Boston closed within four with little more than two minutes to play. He chalked it up to bad luck.

"I felt like I had a bad rhythm," said Allen. "The ball just looks on line and it catches a bad part of the rim. I look at it as a fluke. Sometimes it's just unlucky. I’ll get back in [the gym] and a shoot a couple hundred more."

in a May issue of ESPN the Magazine.

"It's the most pressure-filled situation any of us can be in," says Celtics guard Ray Allen, one of the league's rare sharpshooters whose career free throw percentage is actually higher in the playoffs (90.4 percent) than the regular season (89.4 percent). "It's something we've done over and over, but there's no duplicate experience in the gym. Making 100 in a row in practice, which most guys have done, isn't the same as making two in a playoff game."

Later, Allen detailed the increased pressure that even teammates feel for the shooter.