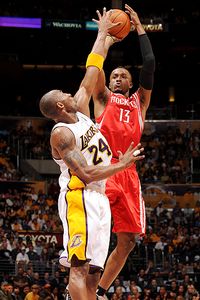 Von Wafer shoots over Kobe Bryant during the 2008-09 season.The Boston Celtics have signed shooting guard Von Wafer to a one-year deal, according to a report on HoopsWorld.

The just-turned 25-year-old Wafer, tabbed by the Los Angeles Lakers in the second round (39th overall) of the 2005 draft, is a veteran of four NBA seasons, but spent part of last year playing overseas, then joined the Dallas Mavericks on a 10-day contract and did not appear in any games. He's averaged 6.2 points, 1.3 rebounds, and 1.1 assists over 109 career NBA games.

The Boston Celtics have signed Von Wafer to a one-year contract, according to sources close to the situation. The deal will be fully guaranteed and worth the veteran's minimum.

The Celtics had spent the past week looking for a guard to replace Tony Allen. Eddie House, Roger Mason, and Jarvis Hayes were mentioned as options, but the team ultimately went with Wafer because of his ability to score off of the bench.

Wafer had also received offers from the Cleveland Cavaliers, who he worked out for on Tuesday, and several teams overseas before deciding to join the Celtics. Prior to a stint with Olympiakos in Greece, Wafer last averaged 9.7 points per game for the Houston Rockets in 2008.

The veteran's minimum would pay Wafer $884,881 for a player with four years experience.

Analysis: Little more than 24 hours after I questioned whether Wafer would be a good fit in this week's Celtics Mailbag, Boston appears to have selected him to be their designated Eddie House/Michael Finley-type shooter/scorer off the bench.

The good: Wafer boasts quality size (6-5, 210 pounds) and really shined during the 2008-09 season with a Houston team that made a nice little playoff run (falling to the Lakers in the Western Conference semifinals in seven games). Wafer averaged 9.7 points on 44.7 percent shooting overall over 19.4 minutes per game.

The bad: It's unclear whether the Celtics can afford him that many minutes in a veteran lineup, but the lack of depth at the wing may leave them no choice. The departed Tony Allen averaged 16.5 minutes per game last season and Boston certainly could benefit from giving Ray Allen as much rest as possible as the season goes along. But Wafer hasn't blossomed as he did in Houston anywhere else, likely due to a lack of minutes. He's also not a particularly strong 3-point shooter, averaging 33.7 percent for his career, with the 39 percent with the Rockets far and away his best season from beyond the arc.

With Miami signing Eddie House and with the Cavaliers showing interest in Wafer (they reportedly worked him out Tuesday), the Celtics appear to have moved in quick on the low-cost free agent.

The HoopsWorld report suggests the deal is fully guaranteed, which makes it likely Wafer will be with the team through the start of the season. The signing pushes Boston's roster to 13 players signed and, the expected addition of second-round pick Luke Harangody will soon push it to 14, essentially maxing out the Boston roster (for reasons we talked about at the top of this week's mailbag).

Of course, the Celtics can still utilize Rasheed Wallace's contract as potential trade bait if he follows through with his plan to retire, which might allow them to still shop for an impact big man (or another backup wing) through the trade market.