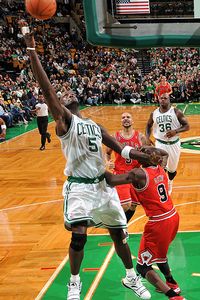 Kevin Garnett is grabbing defensive rebounds at a rate greater than any other in his NBA career.A cursory glance at the box score from Boston's 104-92 triumph over the Chicago Bulls on Friday night reveals that Kevin Garnett had a monster game on the glass, hauling in 17 rebounds (something he's only done three other times in a Boston uniform and not since December of 2008).

For the 2010-11 season, Garnett is fourth in the league in defensive rebounding rate at 31 percent, right behind Dwight Howard (31.3), Marcus Camby (32.8) and Love. This doesn't just suggest a bounce-back year for Garnett, it's taking him back to his glory days.

And the uptick in grabbing defensive boards isn't lost on the coaches who know him best.

“He’s active, he’s rebounding the ball off the rim," said Bulls first-year coach Tom Thibodeau, who watched Garnett for three previous seasons on the Boston bench. "He’s going to get rebounds out of his area."

Concurred Celtics coach Doc Rivers: "We were talking about that before the game, Thibs and I. And that’s the biggest difference: Not only above the rim, but out of space. Last year, the ball went there," Rivers said pointing a short space in front of him, "and Kevin couldn’t get there to get it. Now he can. And that’s huge for us.”