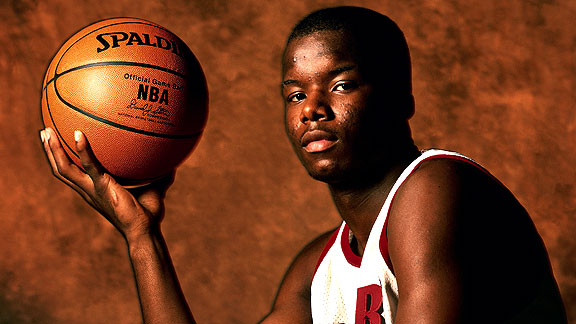 Jermaine O'Neal as an 18-year-old rookie in 1996.NEWARK, N.J. -- Jermaine O'Neal made the trip to New Jersey with the Celtics, an encouraging sign that he's working his way back to getting on the court again (and though coach Doc Rivers stressed last week that no return is imminent, he did say O'Neal hoped to resume working out this week).

Sunday's date -- Dec. 5 -- is an anniversary for O'Neal, who became the youngest player to ever participate in an NBA game on this date in 1996, suiting up for the Portland Trail Blazers less than two months after his 18th birthday. O'Neal logged three minutes off the bench, scoring two points while hitting the only shot he attempted (and committing two turnovers), as Portland topped Denver, 115-104.