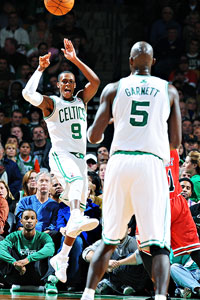 Kevin Garnett has been a frequent beneficiary of Rajon Rondo's assists this season.Celtics point guard Rajon Rondo has handed out a league-best 226 assists in just 16 game, spreading the ball around to nine different teammates thus far (only Luke Harangody, Avery Bradley, Von Wafer, and Delonte West haven't scored off a Rondo feed this season, among players with floor time). Here's a list of the players that have benefited from Rondo's assists, with the total percentage of his assists that player has accounted for in parentheses: