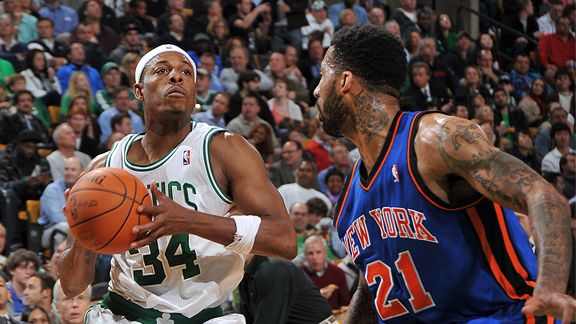 Why doesn't Paul Pierce consider the Knicks a rival? The numbers tell the story.Why were the Boston Celtics so quick to dismiss the rivalry chatter in advance of Wednesday's game against the New York Knicks. ESPN researchers help provide the answer:

* In the new Big Three era, the Celtics are 11-2 against the Knicks. In their 11 wins, the Celtics have outscored the Knicks by 12.3 points per game.

* The Celtics and Knicks are in the same division with the current alignment in place since the 2004-05 season, when the Bobcats joined the NBA. In that time, the Celtics have won the division four times. The Knicks have never finished higher than third in the five-team division. Here's a closer look:

Over the previous nine seasons, the Celtics have made the playoffs seven times. They’ve reached the NBA Finals twice. In that same period, the Knicks have one playoff appearance and were swept in the first round. A closer look: