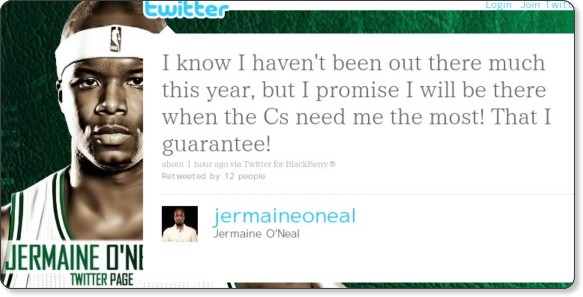 One day after surgery the Celtics hope will alleviate the soreness in his left knee and allow him to return before the postseason, Jermaine O'Neal took to Twitter Saturday suggesting in a series of Tweets that surgery went well and that he believes he'll be back before the end of the regular season.

Wrote O'Neal: "'Banner #18' and if you are a C's fan, then you know exactly what I'm talking about! That's my focus and determination dealing with rehab!" In an earlier Tweet, he wrote, "This has been the toughest year of my career by far! I know that god has a plan for me so i wont lose faith or question him at all!"

The Celtics expect O'Neal to be sidelined for 6 to 8 weeks, putting his potential return around late March/early April and potentially allowing him to sneak in a few games before the postseason.