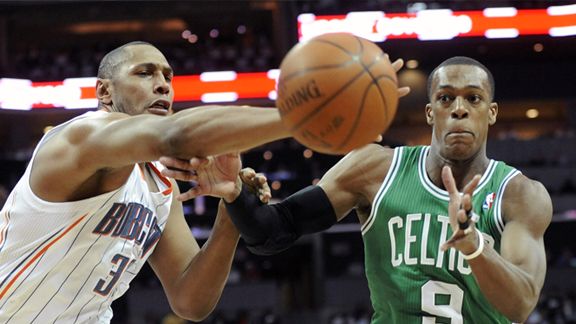 Rajon Rondo and the Celtics were frustrated by a pesky Charlotte squad.CHARLOTTE, N.C. -- Everything you need to know after the Charlotte Bobcats defeated the Boston Celtics 94-89 Monday night at Time Warner Cable Arena:

The good news for the Boston Celtics: They don't play back-to-backs in the postseason. The bad news: To get the lofty seed they covet in the second season, Boston has to figure out how to reverse its fortunes when the schedule calls for games on consecutive nights. Playing their 13th back-to-back of the season, the Celtics dropped to 6-7 on the back ends, including a head-shaking 2-7 record on the road.

With Spike Lee the latest to stand up on his soap box and publicly condemn Kevin Garnett for his on-court behavior, joining a line that grows deeper each day with opposing coaches, players and a slew of national pundits, Celtics coach Doc Rivers jumped to the defense of his star forward before Monday's game against the Bobcats. "That means he’s on their mind, that’s fine by me," Rivers said. "Kevin does nothing wrong, he plays the game the right way. I think all these people that call him out would take him on their team right now. Other than that, I could care less about that stuff."