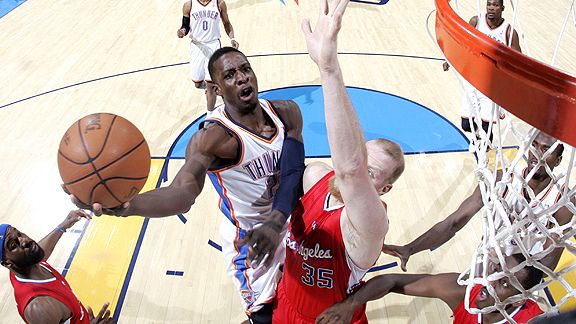 Jeff Green adds a versatile player at oth ends of the floor.Celtics coach Doc Rivers always seemed proud that he could point out that his starting lineup over the last three seasons of Rajon Rondo, Ray Allen, Paul Pierce, Kevin Garnett, and Kendrick Perkins had never lost a playoff series when healthy. Whether that trend would have continued through the upcoming postseason will never be known, as Perkins was traded to the Oklahoma City Thunder on Thursday along with Nate Robinson in exchange for Jeff Green, Nenad Krstic, and a future first-round draft pick.

Indeed, the Celtics dismantled what was their most ideal and often used starting unit of the last three-plus years. But in bringing in a 6-foot-9 versatile forward in Green, the Celtics now have the option of recreating one of their most successful five-man units from the 2008 championship season. During the regular season of that campaign the Celtics' second most-used five-man unit consisted of Rondo, Allen, Pierce, and Garnett being joined by 6-foot-8 swingman, James Posey.

It was a smaller lineup predicated on spreading the floor on the offensive end, with Garnett serving as the unit's center, while Posey roamed about along the perimeter, serving as another threat from beyond the 3-point line. The popularity of that lineup extended into the 2008 postseason, as Rivers resorted to only two other five-man units more often over the course of the championship run.

While not great defensively, the unit's success on the other side of the ball was undeniable. The Rondo-Allen-Pierce-Posey-Garnett unit ended the postseason averaging 108.2 points per 100 possessions -- a number that would rank fifth in the NBA today. Rivers often resorted to this lineup in the fourth quarter of playoff games, electing to sit Perkins in favor of the offensive boost Posey often provided.

The idea of being able to replicate that lineup (and that offensive success) with Green in place of Posey clearly appealed to the Celtics, and Rivers identified it as one of the strengths of the recent trade.

"We needed to get that [small forward or power forward] swing guy," Rivers said prior to the Celtics' 89-75 loss to the Denver Nuggets on Thursday. "One of the things I was just saying is that this gives us the ability -- like the year we won it -- at times we can go small with Green at the 4 and Kevin at the 5, with Paul and Ray spreading the floor. We've been trying to get that lineup ever since [James Posey] left. You forget how many times we did that in the playoffs, which was every fourth quarter. We haven't been able to duplicate that and, in some ways, it's hurt Rondo."

The Celtics seem excited about what could potentially be a very dynamic unit on the offensive end. Green gives the Celtics a third shooter, and his ability to extend out past the 3-point line should open up more lanes for Rondo to attack the rim. If the defense collapses on Rondo, he could have as many as three quality shooters in Allen, Pierce, and Green open for shots along the perimeter. Green's a career 33.8 percent shooter from 3-point nation -- a figure that doesn't differ drastically from Posey's career average of 35 percent from distance. Meanwhile, Garnett should be free to operate in the post against his defender without the threat of a double-team, since Green will have brought his man away from the hoop.

The only player of that unit that defenses could conceivably help off of is Rondo, but the Celtics could combat that with adjustments of their own, or Rivers could replace Rondo with Delonte West, whose shooting prowess will force defenses to stay honest. A lineup consisting of West, Allen, Pierce, Green, and Garnett would actually be similar to the lineup of Eddie House, Allen, Pierce, Posey, and Garnett that the Celtics utilized throughout the 2008 postseason. That unit played the final 6:05 of the fourth quarter in Game 4 of the 2008 NBA Finals, completing what was a historic comeback from a 24-point deficit against the Lakers.

The ability to create an offensive lineup with so many options might have been a primary motivation for Boston, seeing as not being able to procure one hindered them at key points in last year's postseason. While many folks point to the rebounding column as the reason why the Celtics lost Game 7 of the NBA Finals to the Lakers, they still boasted a 13-point lead midway through the third quarter. It was the Celtics' offense that failed them for much of the final frame. Boston went scoreless from the 6:27 mark to the 3:46 mark of the fourth quarter in Game 7, at a time when the Lakers were embarking on a 9-0 run and amassing a 70-64 advantage. With Green now in the mix, the Celtics are hoping they can avoid such droughts in this year's playoffs.

With Green set to come off the bench for the Celtics, Rivers won't be able to brag about him serving as the fifth man of a starting unit that never lost a playoff series. But if Green's efforts and versatility off the bench help to make a key difference in another successful championship run for Boston, Rivers won't mind boasting about that instead.