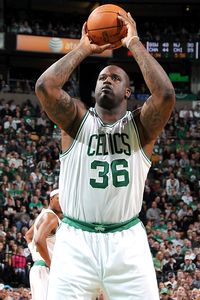 O'Neal said that his right foot, including an inflamed right Achilles, continues to trouble him, but suggested that if this were the playoffs, he'd play through the pain.

"[The Celtics] want me back at 100 percent," said O'Neal. "I tried to run on it the other day, felt pretty good, but afterwards we kind of took a step back, so hopefully in a few days, in a week or so, I'll be back."

O'Neal has missed 13 games due to the combination of pain is his right foot and hasn't been on the court since Feb. 1. The Celtics are 9-4 without him. For the season, O'Neal has appeared in just 36 games, but is averaging 9.3 points and 4.9 rebounds over 20.7 minutes per game.

Celtics coach Doc Rivers has said O’Neal is the starting center when healthy enough to return.

O’Neal said if this were the playoffs, he’d be back in action already, but noted that Rivers and Boston’s Big Three have all urged him to take his time coming back.

"I would have to probably go through a little bit more old school tactics, but I have to give my credit to Dr. McKeon and Doc Rivers," said O'Neal. "They won't let me shoot. I asked them the other day [if I could shoot]. They said, 'No, it's not right. Let's just get it healthy.' My hat's off to Dr. McKeon and Doc Rivers for doing it the right way.

“But I'm an old school guy. If I can walk, I can play. I asked to shoot many times, but they refused, and the Big Three said they wanted me to be 100 percent healthy. So, I'm getting there. Right now I'm probably about 85 percent."

O'Neal celebrated his 39th birthday Sunday. He appeared at the Children's Museum Monday to share an oversized cake with local children.