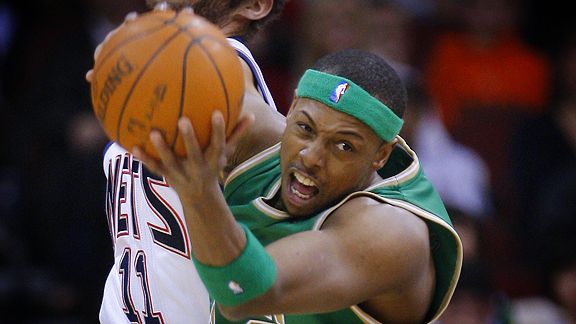 Back-to-backs continue to be an Achilles' heel for Paul Pierce and the Celtics.First impressions after the New Jersey Nets defeated the Boston Celtics 88-79 Monday night at the Prudential Center in Newark, N.J.:

New Jersey connected on 11-of-25 3-pointers with Williams and Anthony Morrow combining for seven of those triples. On the flip side, Boston made a mere 2-of-10 trifectas, both by Allen.

In only his second game back after missing four contests because of a strained patella tendon in his left knee, Davis tried mightily to carry the Celtics to a win. He finished with 16 points and 14 rebounds over 32 minutes off the bench.

You were expecting a different result on the tail end of a back-to-back on the road? Boston dropped to 2-8 in that situation (losing six in a row). The bad news: Boston has four more back-to-back finales on the road before season's end. That doesn't bode well if the Eastern Conference standings remain close. (Chicago pulled even with Boston in the loss column atop the conference.) The good news (as always): No back-to-backs in the postseason.