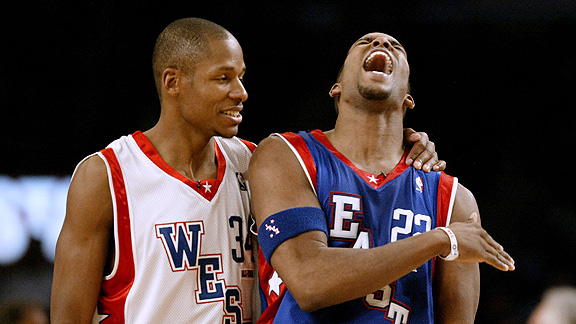 Ray Allen to Michael Redd: "No, really, we're going to need you to come to Boston for the minimum."Continuing our offseason look at players that could be of interest to the Boston Celtics once a new collective bargaining agreement is achieved with a look at shooting guard Michael Redd:

The skinny: One of the league's elite scorers until knee injuries interfered in recent seasons, Redd averaged 21 points or better from 2003-2008 before suffering tearing the ACL and MCL in his left knee in January of 2009. Redd returned nine months later for the start of the 2009-10 season, but re-tore both ligaments less than a year after the original injury, sidelining him for the next 14 months.

Why it makes sense: What's the value of a soon-to-be 32-year-old shooting guard who has missed 185 games over the past three seasons, including 136 of 164 contests the last two campaigns? If you're the shooting-craving Celtics squad, you hope it's something low enough to be a potential bidder (whether that's the veteran minimum, the bi-annual exception, or a reasonable slice of the mid-level, depending on what lives on in the next collective bargaining agreement). Celtics coach Doc Rivers referenced Dallas' shooting abilities as a primary asset in topping the Miami Heat in this year's NBA Finals and has said that Boston needs to improve in that area next season. Redd is a career 44.9 percent shooter and 38.3 percent beyond the arc. No one is expecting him to get back to pre-injury levels, but the idea of having him behind good friend Ray Allen on the Celtics bench is intriguing.

Why it doesn't make sense: Even with the recent injuries, there's always a market for a sharpshooting guard and other championship-caliber squads might be able to pitch a larger role (the Chicago Bulls probably wouldn't mind the idea of Redd joining league MVP Derrick Rose in their backcourt). While he's made over $100 million in NBA contracts, Redd is still young and could crave more money and a longer contract than Boston is willing (or able) to offer.

Bottom line: It likely comes down to what Redd wants at this point in his career. If he wants a shot at a title and a chance to prove he deserves big NBA dollars again, a one-year stint with a contender wouldn't be a bad thing for him. But given his injury history, will he be lured by more security?