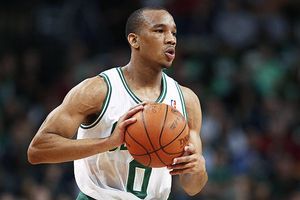 Boston's Avery Bradley is off to Jerusalem.Celtics guard Avery Bradley has inked a deal to play overseas with Hapoel Migdal Jerusalem, according to his agent Mitchell Butler of Lagardère Unlimited.

The deal includes an NBA opt-out clause that will allow Bradley to return stateside should a new collective bargaining agreement be achieved.

Hapoel Migdal is in the middle of its exhibition play and Bradley inked a one-year deal with the team. Israel League play is scheduled to begin on Oct. 17.

Butler said this summer that he was exploring options for his client, but with the lockout lingering -- it recently forced the NBA to wipe out the entire preseason and is now threatening regular-season games -- Bradley has secured himself a chance to get back into a structured competitive situation.

"Avery just needs to get on the court and play," Butler said in July. "That structure could be good for him."

Bradley spent much of the summer working at Impact Basketball in Las Vegas, including participating in their Lockout League with Celtics teammate Jermaine O'Neal.

Bradley, the 19th overall pick in the 2010 draft, suffered an ankle injury in a pre-draft workout with the Oklahoma City Thunder that deterred the start of his NBA career. He missed most of training camp and the exhibition season, then appeared in 30 games for Boston, settling for bite-sized chunks of minutes at the end of quarters and ultimately logged 21 percent (34 minutes) of his season playing time during Boston's final two games of the regular season, as the Celtics rested starters in advance of the playoffs.

Those two appearances included an encouraging glimpse against the New York Knicks in the regular-season finale, where Bradley scored 20 points on 10-of-16 shooting, while adding three rebounds, two steals and two assists over 27 minutes in a 112-102 triumph.

"I felt good," Bradley said after the game. "I mean, we've been practicing a lot and [I've been] going up against [Rajon] Rondo every single day. We go hard in practice, and so, those guys just got me so much better from the beginning of the year to now. Even though I don't play much, I still get better in the little bit of time we've got in practice and on my own. It was big for me tonight to go in there and show coach that I go hard when my name is called on to help our team out any way I can."

"Listen, Avery didn't have a normal NBA season," Rivers said during June's draft. "He missed the entire training camp. He missed the entire preseason. He had no chance last year. It was just unfair for him -- physically, mentally, everything. This year, hopefully he gets a fresh start and a fair start with his health."

Bradley trekked to Orlando before the lockout to spend time with Rivers, who knows a thing or two about being an NBA point guard.

"Right now, Avery's a scorer, he's not really a point guard," Rivers said. "He's a direct line-drive guard. We ran a couple sets for hand-offs that, with his speed, getting to the basket, he finishes at the basket. He was an NBA defender before he got here, and he still is. We haven't messed him up. So he's a better defender now. And he's young, we can't forget that. He should be a sophomore in college, right?"