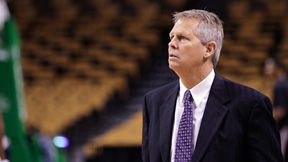 Danny Ainge has his work cut out for him.As the league prepares for a frenetic free agency period, one that will almost certainly open with a slew of deals on Friday (despite the league's insistance that no pacts can truly be consummated before then), we've been inundated with questions asking if the Celtics can sign Player X or Player Y.

If you're asking, the answer is probably, "No."

Here's the bottom line: The Celtics will be a luxury tax-paying team and therefore will have only the mini mid-level exception ($3 million) with which to attract anything more than a minimum-contract player. The Celtics are already over the salary cap with the team on the hook for $64.9 million for seven players (that's including a $5.7 million qualifying offer to Jeff Green, and that price tag should only rise). Boston will be able to sign its rookies and use Bird Rights to potentially pay to retain the likes of Green and Glen Davis.

After that? It's minimum contracts or bust.

No. No. Heck no. Now you're talking! (And even Brown might get overpaid by another team).

That's not to say the Celtics can't get creative with the goal of bringing in another big contract. The team could work a sign-and-trade with Davis. Trouble there is that he's an unrestricted free agent and a team with deep pockets can sign him without the need to involve Boston (though it could be financially beneficial to Davis to go that route).

The Celtics also have to be financially responsible this offseason should they wish to maintain their cap flexibility next offseason, when the likes of Kevin Garnett and Ray Allen come off the books (and the team will have its amnesty clause if it wishes to axe another contract). Celtics president of basketball operations Danny Ainge knows the challenge he's facing.

"Every year is a challenge, it brings different challenges," Ainge said this week. "A few years back, we had a target and we went after Rasheed [Wallace], and it was easy that way. We don’t have the same [financial] flexibility this [offseason] to do some of those things. We’re just in the game. We have a list of players we’d like to get. Right now there’s a lot of money out there, lot of teams with cap space. Players are waiting for the big paydays, so we have to be patient in this process."

There's still low-cost players with high-reward talent available. The Celtics could attempt to bring back players like Delonte West and Marquis Daniels, two guys worth more than the minimum if able to stay healthy. Otherwise, Boston will be left looking at veterans willing to sign at low money for a chance to ride with a championship-caliber squad.