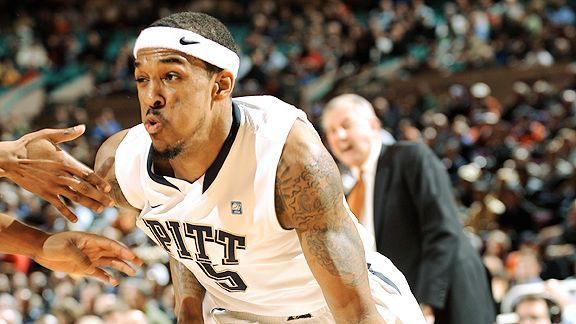 Undrafted out of Pittsburgh, Gilbert Brown is hoping to make the Celtics' roster.Undrafted free agent Gilbert Brown, who the Celtics expressed immediate interest in following June's draft, will join the team for the start of training camp Friday with the goal of earning a spot on the roster, according to his agent.

Brown, who drew interest from the Celtics with the No. 55 pick used to select E'Twaun Moore, joined both of Boston's draft picks at the team's practice facility in the days following the draft. He played overseas in Germany during the lockout, but was expected to join the Celtics with the goal of competing for a roster spot when the lockout lifted.

"With so much uncertainty all around the league, Gilbert is excited for his opportunity to be with Celtics and fully expects to make the team and be a contributor," said his agent Terrance Doyle of Veritas Venture Group.

Brown is expected to arrive in Boston on Thursday and should be on the floor when training camp opens Friday.

A 6-foot-6 shooting guard, Brown averaged 11.3 points per game as a senior at Pittsburgh while shooting 45.8 percent from the field and 41.3 percent from beyond the 3-point arc. The scouting report suggests he's a gritty defender, but he needs to hone his offensive game.

Brown still faces an uphill battle to make the Celtics' roster, but a lack of bodies works in his favor. Boston currently boasts only six players under contract with a qualifying offer extended to restricted free agent Jeff Green. Celtics president of basketball operations Danny Ainge said last week he hoped to have 10 bodies when camp opens Friday, and Brown could benefit from the opportunity to make an early impression while Boston pursues other players in a frenzied free-agent period.