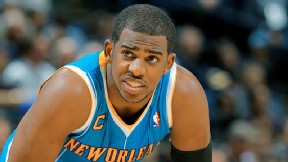 The Celtics are reportedly exploring ways to get Chris Paul to Boston this season.As part of his "The 12 Days of NBA Christmas" on Grantland, Bill Simmons offers his thoughts on potential destinations for Chris Paul and sounds off on the Celtics for how they've handled their interest:

The Trade: Chris Paul for Rondo, Jeff Green (sign-and-trade) and possibly one or two no. 1 picks.

The Verdict: No way. Why would you want to overpay Jeff Green if you're New Orleans? Why not just re-sign David West? How do we know Green even wants to play there? And if you're New Orleans, wouldn't you rather have Stephen Curry, anyway? For the record, Paul makes $16.359 million this season and Rondo makes $10.045 million; the Celtics have only six players under contract and, unless Green were involved, could include only Jermaine O'Neal ($6.226 million, expiring this season) to make the Paul/Rondo swap work … unless they wanted to get creative, use their amnesty on Kevin Garnett (knocking $21.2 million off their cap), then trade Rondo and O'Neal for Paul and Okafor. See? This is absurd. The Celtics aren't getting Chris Paul.

Quick Tangent: As a Celtics fan, I'm horrified by how they are handling this — publicly, they're saying they aren't shopping Rondo, and privately they're dangling Rondo to New Orleans and EVERYONE KNOWS THIS. Seriously, what are the odds they can pull that trade off? 20-to-1? That's worth putting Rondo in a funk for the entire 2011-12 season? Remember, this is the same guy who went into a shooting tailspin after one harmless Obama joke.3 And by the way, didn't Rondo take less money to stay last season? That doesn't matter at all? Really, it's all business all the time? That's the best way to run a basketball team?

In general, it feels like the Celtics organization has lost touch with what made that team special — the chemistry between their best guys and their coach — starting with Ray Allen getting shopped for two straight trade deadlines, continuing with last February's brutally cold Perkins trade, then cresting with this Rondo debacle. Why would any Celtic feel safe at this point? How can Doc Rivers preach "ubuntu" with a straight face after the past two years? Does ubuntu mean, "Togetherness … unless we're trying to trade you?"

Hey Danny? If you really want to blow this up, then have the balls to actually do it — use your amnesty on Garnett (who's never making it through that inhumane 66-game schedule they released yesterday, much less nine weeks of playoff games with one day's rest between each game), try to sign Tyson Chandler, then try to trade Rondo, O'Neal's contract, two no. 1 picks and $3 million for Paul, and hope that Paul and Chandler say, "Cool, let's play in Boston together!" Sure, you'd be taking a mammoth shit on Garnett — the guy who made basketball relevant in Boston again — but at this point, what's the difference? You shit on Perkins last February and you're shitting on Rondo now. Why not add KG to the list? Either way, the Celtics made their bed here: Chris Paul or no Chris Paul, they're probably going to have to trade Rondo this season just because they handled the entire year so poorly. If you were Rondo, would you want to remain with this franchise? I sure wouldn't.