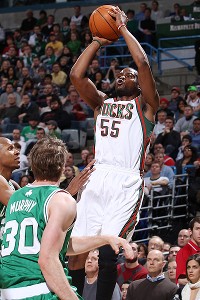 Keyon Dooling vs. Boston.MILWAUKEE -- The Boston Celtics have a deal in place to acquire veteran guard Keyon Dooling in a trade with the Milwaukee Bucks, Dooling's agent tells The Associated Press.

Agent Kenge Stevenson says the deal will not be official until Friday. NBA owners and players ratified a new collective bargaining agreement Thursday, the final step to ending the five-month lockout and paving the way for training camps and free agency to open Friday.

Dooling played 80 games for the Bucks with 22 starts last season, averaging 7.1 points and three assists. He was the No. 10 overall pick out of Missouri in the 2000 draft.

The Bucks are expected to receive a second-round pick in return.