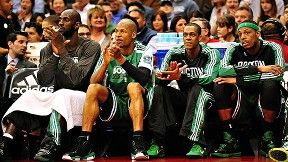 It's time to get back to work for the Celtics.The Boston Celtics will open training camp Friday afternoon at the Sports Authority Training Center at HealthPoint and could boast 14 bodies for the official start of the 2011-12 season. The Celtics currently boast six players under contract and, when the league allow transactions to begin at 2 p.m., it's expected the team will officially add a handful of bodies, while also welcoming a group of camp invitees looking to compete for a roster spot. A glance at the players expected at camp:

The biggest question is if (and when) the Celtics will have restricted free agent Jeff Green in camp. Before the lockout, the team extended a $5.9 million qualifying offer. Now, Green can accept that offer and play out the final year of his current deal, allowing him to become an unrestricted free agent this summer, the two sides can negotiate a long-term extension, or Green can field offers from other squads (but Boston can match any offer).

Celtics president of basketball operations Danny Ainge expressed a desire to bring back not only Green, but has reached out to the representatives of unrestricted free agents Glen Davis and Delonte West during the days leading up to the opening of camp. Once transactions begin, the Celtics should have a better idea of the market and can determine their options from there. The Celtics will have the $3 million mini mid-level exception as their only bait above a minimum contract.